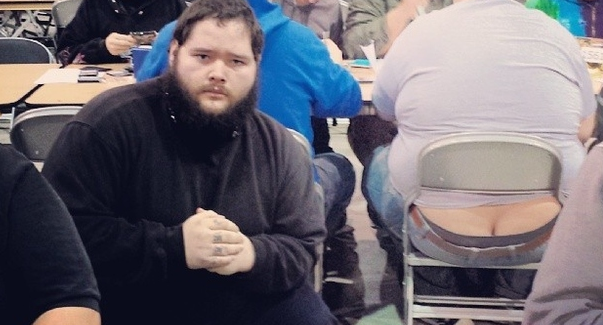 Well, this was an excellent idea as it’s probably where you will find the most exposed buttcracks in the world.

As such, one dude had a completely sick idea to head over to a really big Magic: The Gathering tournament and take pictures next to as many fat nerds with exposed butt cracks when they were sitting down as he could. And of course, there was an abundance of them.

Feast your eyes on the gallery below. Not sure why he’s praying in every photo, I guess maybe because their butt cracks stink so bad of sweat and dried toilet paper?

No news on how this guy actually did at the tournament but I doubt it was very well, although he too is big, fat, hairy, sweaty nerd so he could be the world champion for all we know.

â˜› More Butts: What Did People Get Stuck In Their Butts This Year?