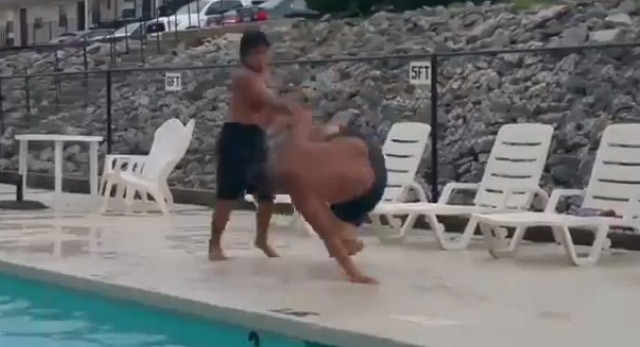 You gotta love seeing a bully get what’s coming to him.

In the video it looks like some kids are having a disagreement at some kind of apartment complex by the swimming pool and the much larger kid thinks it’s a good idea to try and throw the smaller kid in the pool to try and finish it off. Not gonna work though buddy – turns out that the smaller kid is some MMA master and he hands the much bigger kid a rough beatdown whilst the bigger kid doesn’t even really lay a hand on him.

The bigger kid even falls flat on his face like a complete dumbass at one point – absolutely told.

It’s a shame that that stupid adult had to come and break things up because I could see the big guy getting a taste of his own medicine by the end of the video and getting thrown in the pool. Stupid adults always screwing everything up.

For more instances of bullies getting their asses handed to them, check this out.