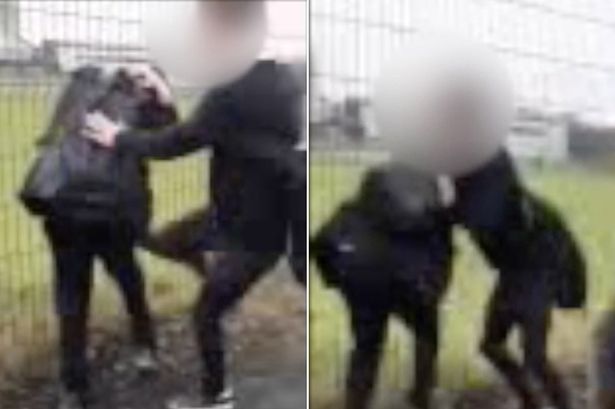 Kids can be so cruel.

One of the big problems with reporting bullying when you’re a school kid is that even if your teachers do manage to do something about it, chances are that you’re just going to end up getting bullied even harder the next time your tormenters manage to corner you, and this video is more than proof of that.

Filmed during lunchtime outside a school in North Lanarkshire, the video shows a group of boys attacking and kicking another kid who had apparently previously dobbed them in for bullying. He was allegedly forced to roll around in shit and had juice poured all over his head too, although you don’t see that in this video and just see him taking some pretty swift Conor McGregor style kicks to the body.

Airdrie North councillor Sophia Coyle has promised that the video will change the way that schools deal with bullying which occurs outside their grounds:

This video makes for shocking viewing. The boy tried to phone his mum when he was first approached by the culprit but was quickly punched and kicked.

He also had Irn Bru poured over his head and was rolled around in dog dirt and has been left traumatised by the experience.

This was in response to him reporting a previous instance of bullying and things like this cannot be allowed to happen.

This was in response to him reporting a previous instance of bullying and things like this cannot be allowed to happen.

The boy’s parents are very distressed and there has to be repercussions for the culprit and any bullies who commit awful acts like this.

The school are saying that they can’t do anything about this incident as it took place outside school grounds but I don’t think that’s acceptable.

School staff could be standing at the gates to supervise or keeping an eye out during lunch breaks and when the school day finishes.

The boy who was attacked has been told to stay in school during lunch breaks and eat in the canteen for his own safety, but what kind of school day life is that for him to lead.

He shouldn’t be restricted because of the violent actions of others.

I’ve got to say I totally agree with all that – schools can’t monitor their pupils everywhere, but I don’t think it would be that hard to see what’s going on right outside their grounds to try and stop it. Bullying sucks and everyone should be doing their best to stop it, not just wiping their hands of it because it isn’t occurring on school property. Here’s hoping this video actually does something about it.

For more dog turds, check out this Australian woman throwing one in a cop’s face. Grimy.