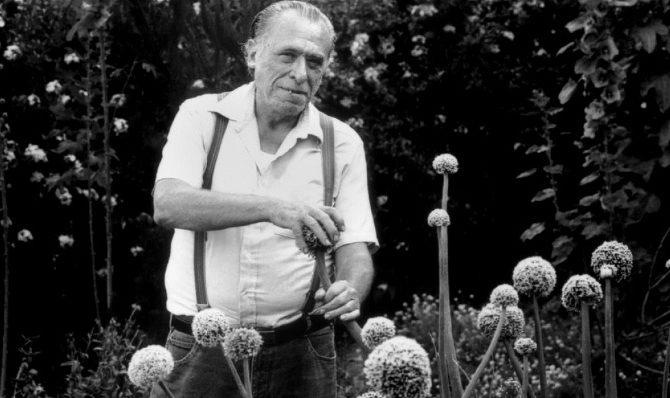 If you call yourself a literature fan, then you’re a fan of Charles Bukowski. But are you a genuine fan or somebody trying to be ‘hip’? Sick Chirpse takes a look at why it’s hip to like Bukowski.

I was 18 the first time I read Bukowski. I was also 18 when I lost my virginity but that’s something different, for another time. With Bukowski, I was in uni, being subjected to loads of boring crap like Jane Austen and Virginia Woolf and Ann Radcliffe and if you’re a regular reader of Sick Chirpse then the chances are that you hate stuff like that, too. Reading the stuff is like walking through treacle — yeah, the pages of my books were sticky, most of them were second hand, so what? — and they can really end your dedication to the written word. Read them if you fancy being prescribed Prozac.

One night, after reading about 3 pages in 7 hours, I got on the blower to one of my boyz, weeping with anger at how these books became so famous, shaking with irritation and sweating with boredom, and cut loose on how I hated these books and how I didn’t understand why my lecturer could despise me so much to give me such a shit reading list and how these books had ruined my love-affair with beautiful fiction everywhere. But then my mate on the other side of the phone said something like: ‘Look, it’s not that bad. Just have a break from the stuff you’re reading now and check out a guy called Charles Bukowski. You’ll really like him.’ And the line went dead. Sorta like a cool conversation you see in the movies when two characters are having a conversation over the phone and one of them ends the call, leaving the other guy stunned and lifeless and less cool than the guy he was talking to on the phone. Yeah, it was sorta like that but it wasn’t like that in any way at all, if you get me?

So, yeah, my friend told me about Bukowski over a phone-call so I went online and looked him up. One of the first testimonials I read was this: ‘Takes you by the shoulders and shakes you until your teeth rattle.’ And after reading your way through the shit I was reading back then, it only took that one sentence to buy a book by a writer who I was oblivious to. The book was called Post Office and it arrived a few days later. From the first sentence of: ‘It began as a mistake.’, I was hooked. The short, sharp sentences, the crass humour, the histrionic sexualisation of women, the swaggering style, the references to alcohol abuse and violence and hate for other people and the world. I read the book in a day. Compared to the boring stuff I’d been told I had to read, this was beautiful. I went ahead and ordered his whole collection. Poetry included.

If this is the first time you’ve heard of Charles Bukowski then the best thing you can do is type him into Google. Then watch this film and make up your own mind about the guy. This is one of my all-time favourite quotes from Buk, you can find it in his novel, Factotum: