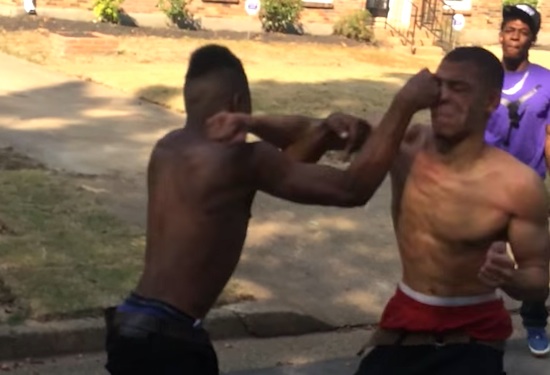 The Crips and The Bloods is one of the oldest gang rivalries in the United States, and it certainly seems like there’s no love lost between the two factions judging by the video below, taken in Memphis, Tennessee.

Apparently Memphis is somewhat of a hub for gang violence in the United States these days, with over 182 known gangs and 84,000 members that regularly partake in activity like that seen in the video. It features one member of the Crips (blue) and one member of the Bloods (red) going at it in a brutal bare knuckle fist fight in the street that can only really be described as “hyper” due to the amount of punches that are thrown:

Absolutely rapid. Not the kind of technique you see when it comes to the octagon or the boxing ring, but probably way more entertaining than both of them. It’s a shame we don’t get to see the actual winner of the fight though – why the hell would you stop filming then when it looked like more stuff was going to happen?

For more of the same, here’s a photoset that gives an insight into life as a Crip in LA in the 90s. Eye opening.