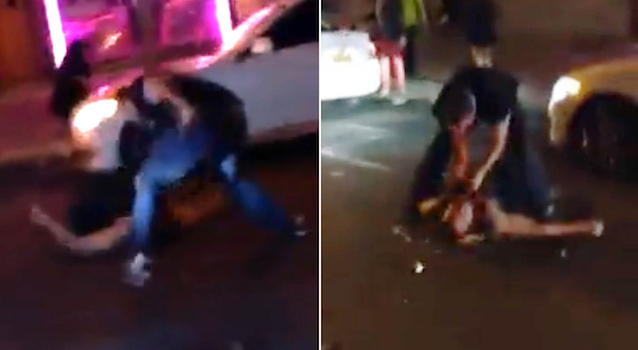 This is actually really really brutal and kind of sad so don’t watch it if you think it might upset you or anything.

This is pretty brutal and kind of upsetting too, mainly because instead of actually helping the unconscious dude who is STILL getting the absolute crap kicked out of him as he lies motionless in the street everyone is just filming it and shouting ‘Worldstar’ and other inane comments. The world we live in.

This went down on Sunday morning at around 5:30am outside a diner in Queens but it isn’t really known what started the altercation, other than the attacker seems like a complete meathead moron for doing what he does in this video. The two men – the cop being Sgt Mohammed Deen, aged 36 and the attacker being a Jamaican guy called Hayden Holder, aged 29 – were said to have exchanged words at a nightclub earlier in the night after Deen bumped into Holder, and then ran into each other outside this restaurant which serves takeout food through a window all through the night. Then stuff got ugly. It just doesn’t seem like that would be enough to warrant this kind of a beatdown.

I mean, even though he’s unconscious in the middle of the street, he still continues to pummel his head and smash it against the floor. Then at one point he goes over to Deen’s BMW – which Deen’s wife is sitting in, looking understandably horrified – smashes on the glass and then when he can’t break it returns to Deen’s limp body and continues to pummel him some more, even though he’s clearly out for the count.

Following the beatdown, Holder was arrested as he tried to escape from the scene and later confessed to the crime, although he also admitted that he didn’t know that Deen was a cop. He’s currently on suicide watch in jail, whereas Deen was taken to Jamaica Hospital and placed into a medically induced coma. His condition is said to be critical. Here’s hoping he manages to pull through, and that he manages to pull through without any permanent brain damage because there is absolutely no way he deserved what happens in this video.

One of Holder’s neighbours Mienkoemar Panchu stated that Holder was known for his violent tendencies and aggressive attitude saying that he would often smash his empty beer bottles in the street for no reason and that everybody used to keep their distance on the block. Sounds like a real piece of work, let’s hope he gets what he deserves for this.