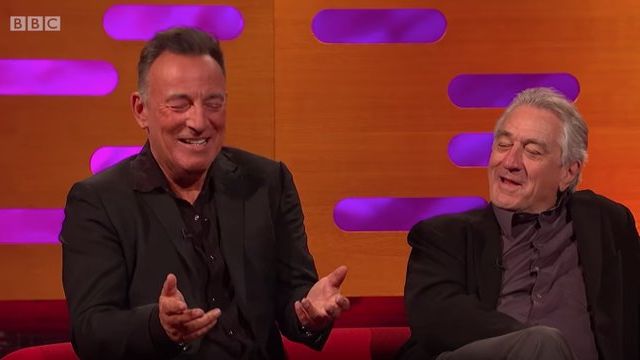 The Graham Norton Show was absolutely stacked last week as Robert De Niro, Paul Rudd and Bruce Springsteen appeared to promote their new projects and it was Springsteen himself who absolutely stole the show.

Central to this was the absolutely incredible story that he busted out about how he broke into Graceland to meet Elvis Presley during his younger years. Take a listen to this:

Steven [Van Zandt] and I wanted to go to an all-night diner. So around 3am we got in a taxi cab – ‘Yeah, there’s one right outside Elvis’ house!’ – ‘Elvis’ house?! You know where Elvis lives? Take us there right now!’ The taxi driver took us to Graceland and I got out, I saw there were some lights on in the house – you could see the house, it wasn’t that far from the drive.

The gates were locked, [there was] a stone wall. I looked at Steve and I said, ‘Steve, I’m going in…’ The taxi driver said, ‘Hey man, they got big dogs over there, don’t go over that wall’. I said, well, when’s the opportunity going to come again?

I jumped over the wall, ran up the drive, got to the front door and I was just about to knock and a security guy came out of the bushes. He said, ‘Can I help you?’, very casually. I said, ‘Yes… is Elvis here?’ He said, ‘Well, Elvis is in Las Vegas’.

I said, ‘Okay, well, can you tell him – and I generally don’t like to do this – that Bruce Springsteen was here? He may not know who that is, but I was just on the cover of Time and Newsweek.

He said, ‘Yeah, I’ll tell Elvis’ and he came down and he walked me out and that’s as close as I ever got to Elvis Presley.

What a joker hey, but I suppose when you’re Bruce Springsteen you can do whatever you want. It’s a shame he never managed to meet Elvis though – can you imagine what those two might have got up to given the chance?

For more of the same, check out Bruce Springsteen’s answerphone message. Legendary.