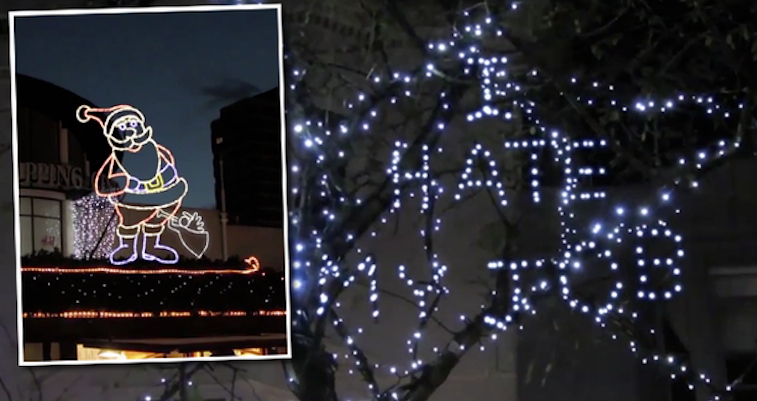 If your job is to put up Christmas lights then you’ll probably hate it because it’s really cold and really hard work and probably crappy pay too, so why not arrange the lights to show sexual images for a bit of a laugh?

This is awesome and doubly so because I’m going to Brighton over the weekend so will get to see it in person. Maybe that won’t be that exciting because it’s probably pretty much just the same as seeing it in a video, but you know whatever. I’m not sure if someone actually did this for a joke and The Poke just found out about it or it was just actually set up by The Poke –  I’m thinking this because it’s on their YouTube channel and they do perform their own stunts every now and again – but either way it’s really funny and deserves a bunch of credit because I don’t think I’ve ever seen such an elaborate cock joke. But yeah, I was just trying to work out who to give credit to over it.

Other than that there isn’t much to say about this video. I’m going to assume that some disgruntled worker set it up rather than employees of The Poke because that would be way funnier and maybe even a better Christmas story, albeit an X rated one and one where the protagonist is never identified and The Poke makes loads of money off the video going viral rather than the protagonist himself, so maybe not although I guess it kinda depends on the vibe of the Christmas story you’re going for. In any case, this disgruntled worker clearly hates his job (as you’ll see in the video) and so for a laugh and a shot at internet notoriety he decided to rearrange a few of Brighton’s Christmas lights so that from certain angles they spell out certain messages or depict sexual situations and images. Pretty jokes right? If anyone knows the truth about it let us know at info@sickchirpse.com, but otherwise there isn’t anything else to say about this video so you might as well just kick back and enjoy it. Merry Christmas!

â˜› More: Elevator Prank That Will Actually Make You Shit Yourself