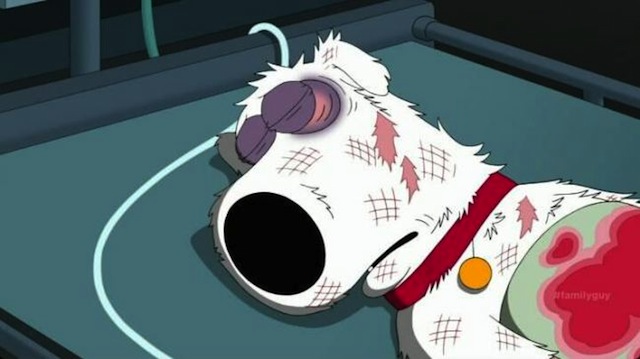 Family Guy creators explain the decision to kill off Brian and replace him with another dog, Vinnie.

It’s been about 13 years since the first episode of Family Guy, which means it’s actually an impressively timely death for one of its best characters — Brian, the alcoholic dog who wanted to shag his owner Lois. They killed the pooch off in last night’s episode and it looks like he’s gone for good.

Not ones to dwell on these sorts of things too long, the Griffins adopted a new dog in the same episode — Vinnie — voiced by Tony Sirico aka Paulie from the Sopranos.

Family Guy’s executive producer explained “This was an idea that got pitched in the writers’ room and it sort of caught fire, and we thought it would be a fun way to shake things up. We started talking about the next couple episodes and got very excited about the way this change will affect the family dynamics and the characters”.

Whether you still watch Family Guy or not, it’s not nice when dogs die, even animated ones. RIP Brian Griffin.

â˜› Up Next: Creepy Cartoon Conspiracy Theories That Will Make You Rethink Your Childhood