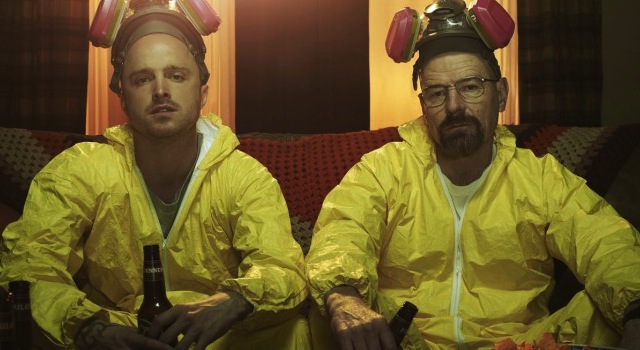 As we in the States are now just entering into the final season of “Breaking Bad”, my boy NOEM and I have been obsessively consuming all things Walter White for the past month or so. We’ve rewatched the entire series, NOEM has been incorporating Walter and Jessie into his artwork, while I’ve been working on edits/remixes of tracks featured on the series (my version of The Peddlers’ “On A Clear Day You Can See Forever” is forthcoming).

“The Wire” title track – “Way Down In A Hole” – is faithfully changed in the same progression that they did on the HBO series, and, as was done with “The Wire”, the new “Breaking Bad” characters and scenery are cycled in chronologically. So I must forewarn you: you’re not caught up on all five seasons of “Breaking Bad”, then watch at your own risk. There are SPOILERS in these videos. But if you are like NOEM and me, and have not only watched but RE-WATCHED all five seasons, then dig in. As Berkowitz aptly states: Seeing Breaking Bad through this lens illuminates their similarities and makes a good case for both shows’ inclusion in the pantheon of capital-g Great entertainment.