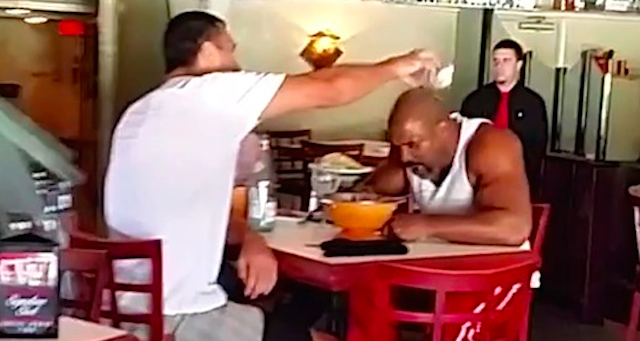 This is completely fucking weird but also really awesome at the same time. I’ve never really seen anything like it aside from in WWE promos so it’s insane that something like it has happened in real life, providing it isn’t a work of course.

Basically, Wladimir Klitschko was eating at Mamma Mia’s restaurant in Florida – which is apparently world famous – and quietly minding his own business, when Shannon Biggs walks into the restaurant, heads over to his table and starts shouting at him like he’s The Rock or something. Biggs then sits down at the table and starts eating Klitschko’s food, saying if he’s the champ then he’s gonna eat like the champ.

Klitschko takes it remarkably well, and calmly picks up his glass of water and pours it all over Biggs’ head, which sends him over the edge as he flips the table and is then dragged out by security. Really weird incident, we can only hope that it’s real, and hope that we see the two of them fighting sometime soon. Preferably in a street fight, not a boxing match.