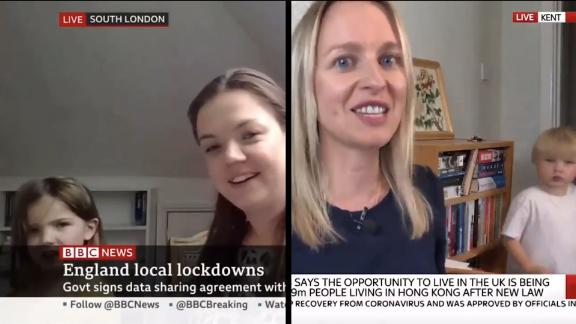 Two children became unwitting viral sensations within half an hour of each other last night as both Sky News and BBC featured invasions by young children interrupting their parents in the middle of their news segments.

First up the Sky News interview between Deborah Haynes and Mark Austin which was interrupted by Deborah’s adorable young son, who had an important question – could he have two biscuits, please?

Kid’s a genius! Striking when his mum is at her most vulnerable – in the middle of a very important discussion on live TV. The biscuit negotiation could not have gone any better if he tried.

Over on the BBC, Dr Clare Wenham’s daughter stole the show during Wenham’s interview with Christian Fraser, with young Scarlett completely hijacking the conversation in the most adorable way possible:

I guess that’s what happens when you’re in the middle of a pandemic and have to multitask giving important interviews on live TV with keeping the kids entertained. Wonder if we’ll be getting any unicorn placement updates on today’s program?

Of course – nothing will ever top the OG clip of children interrupting their parents on the news:

To watch Dave Grohl’s 8-year-old daughter stand in as drummer for the Foo Fighters in Iceland, click HERE. Epic stuff.