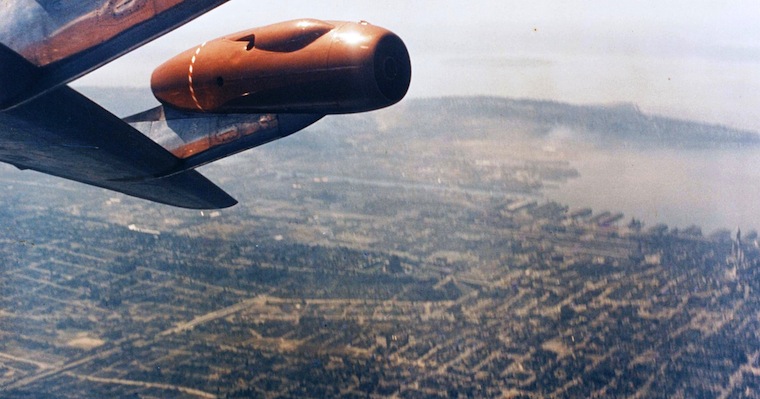 Some dude decided the best way to impress potential buyers of the then new Boeing 707 would be to perform a full barrel roll in mid-flight. Here’s a video and a really awesome photo of the stunt.

When you’re trying to sell something to someone, the best way of making the sale is usually demonstrating how awesome the product is. Whether it’s the latest smart phone, a revolutionary dog lead or adult sized nappies, you need to demonstrate how totally sick the product is and why everyone should totally buy it.

This principle also applies when trying to sell aeroplanes. When a company like Boeing has just made the latest new aeroplane, they want to demonstrate how safe, comfortable, aesthetically pleasing and functional the thing is so airline companies like BA will buy a load from them. This has all kinda gone tits up for Boeing recently, since their latest product ‘The Dreamliner‘ has had nothing but problems. Batteries setting on fire and cracked window screens have caused a full grounding of the aircraft until they can be sure the thing is safe.

â˜› Like Planes? Check This Out Next: Two Aeroplanes Collide In Mid-Air, Both Survive

Back in the day when Boeing were trying to flog their revolutionary aeorplane the Boing 707, they indeed had to do the same thing and demonstrate how totally sick the plane was. One pilot, who was giving the plane a demonstration test run over Washington, decided it would be totally sick and would impress all the potential buyers if he was to perform a full barrel roll while in flight. Now to me this sounds totally bonkers. As if a massive plane like a Boeing 707 can safely do a full barrel roll while flying thousands of feet in the air. The pilot’s boss soon called him into his office after the stunt and told him to never pull anything like that again, which is a pretty fair call.

Here’s a video of the stunt being pulled and the above photo was taken on board the 707 while it was in mid-barrel roll.