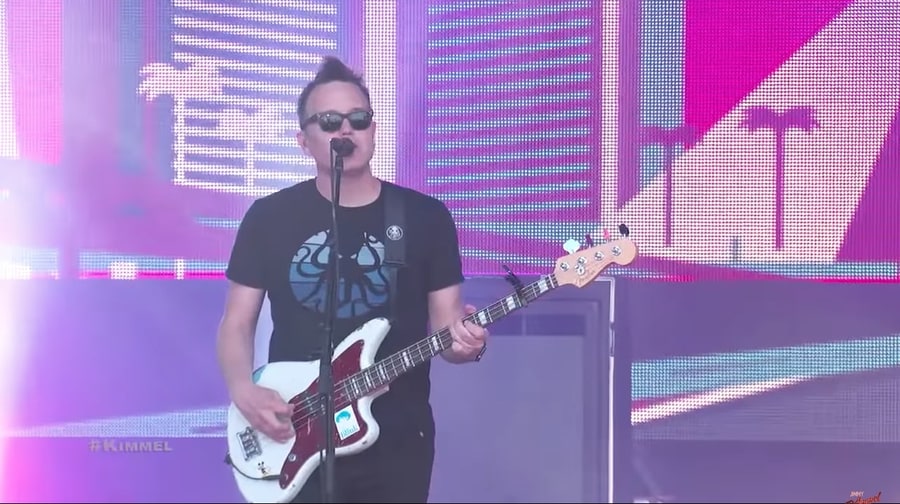 I don’t think there’s ever been a band more polarising in fan assessments of their live performances than Blink 182, and they’ve proven why this is the case yet again with their recent appearance on Jimmy Kimmel, where they performed their classic song ‘I Miss You’.

Of course, any Blink 182 performance of this song in their current line up is going to be criticised immediately because Alkaline Trio’s Matt Skiba is going to sing it and not be able to replicate the iconic Tom DeLonge ‘Where are you’, ‘Voice inside my yead’ etc because nobody can do Tom DeLonge’s stupid voice, but even when you take that out of the equation it still kinda plays out like a really bad cover band playing it at your local rock bar on a Friday night. You can take a look at the video below, but here are a couple of things to watch out for so you can understand why it’s a truly terrible live performance, as I imagine everyone is going to to moan at me for criticising a Blink 182 show as that’s what normally happens when I write about them in that way:

Ugh, that really was painful to watch. Kinda feel sorry for anyone that has tickets for their upcoming Las Vegas residency if the shows are going to be that bad, which seems inevitable given that performance and their reputation. Classic Blink unfortunately.

What makes it even worse is that when Matt Skiba first came into the band, I genuinely thought it would be terrible but he actually shocked everyone by completely killing it. I suppose we could give him the benefit of the doubt and say he just had a bad show, but he’s one that’s known for burning the candle at both ends too so we should probably prepare for this to happen more and more often. Hoppus didn’t exactly help him out either there. Guess there’s only one thing for it – bring back Tom DeLonge.

If you’re unsure what’s going on with Tom DeLonge and why he’s no longer in Blink 182, check out his latest project where he hunts for aliens and tries to build UFOs. For real.