Just when things couldn’t get any stupider down at Ewood Park, Venky’s make the entire Blackburn Rovers squad star in an advert for chicken wings. 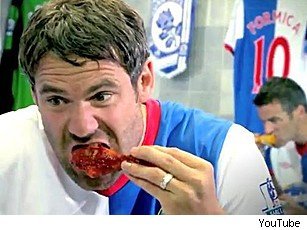 Most people (including Sick Chirpse) have looked on in amazement at the events at Blackburn Rovers since Indian chicken manufacturers Venky’s bought the club back at the tail end of last year. From firing Sam Allardyce for pretty much no reason and replacing him with a nobody like Steve Kean, to an audacious (failed) attempt to sign Ronaldinho in the January transfer window, it seemed like Venky’s and Blackburn were the new joke club of the Premiership and were hopefully going to get relegated, despite their claims that they expected to be a Champions League club within one season. Of course, we now know that they didn’t get relegated and Steve Kean just about managed to keep them up (although they let Wolves score twice in the second half which sent Birmingham down – dickheads) but have the shenanigans surrounding the club stopped there? Nope.

The entire squad has been roped into filming a television advert for Venky’s. I’m guessing it’s probably going to be shown in India to promote the club over there or something? I really can’t see it being shown over in the UK because it’s such a BAD advert. It’s even funnier because adverts that traditionally feature football players normally feature big stars like Jamie Redknapp or Jason Macateer (remember those shampoo ads?) or more recently like Wayne Rooney or Cesc Fabregas or Cristiano Ronaldo or Thierry Henry or someone, generally because even though these people are gootballers they’re still celebrities to most people – even those that don’t like football – because they’re that good at football that just everyone knows who they are. Venky’s and Blackburn Rovers have to pick out the most famous members of their squad to be the ‘stars’ of their advert and came up with, ahem, Ryan Nelson, David Dunn, Morten Gamst Pedersen, Jason Roberts and Michel Salgado. I guess Michel Salgado used to be kind of famous at least. Check out the Blackburn Rovers Venky’s advert below. Take special not of David Dunn’s acting performance:

Possibly the best thing about the video is some of the comments on Youtube e.g. ‘Finally we get to see Morten Gamst Pedersen dominate the wing’ and ‘The last thing David Dunn needs is another chicken wing.’ Must be pretty fun to be a Blackburn Rovers fan huh? What do you think of the advert? Think the players enjoyed making it? Reckon we might see some more of these during the new season? Any other clubs you reckon could come up with something as great as this?