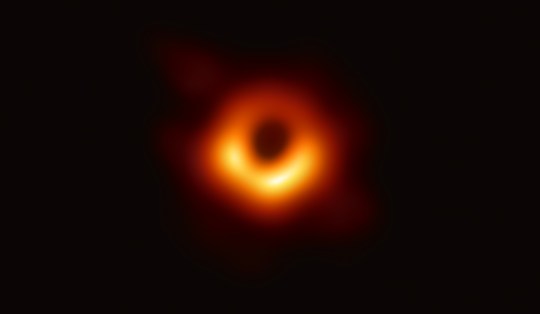 Black holes are probably one of the coolest things in space when you think about it because they’ve got a really scary name and nobody knows exactly what they are or where they go or what happens in them. They’re very mysterious and sexy, to the point that we’ve never even seen a picture of one of them – until now.

The image comes courtesy of a recent press conference in Brussels that was reporting on photographs taken by the Event Horizon Telescope Collaboration (EHTC) – a vast array of telescopes all across the world that are linked together to work in synchronisation to picture stuff that’s really far out there. It shows a supermassive black hole (like the Muse song) in the centre of the Messier 87 Galaxy with a bright ring formed around it from the intense gravity that surrounds it and bends the light.

The black hole is 6.5 billion times bigger than the Sun. Here it is:

Yeah I suppose that’s kind of cool. Not really sure what I was expecting to be honest – some massive vortex sucking loads of houses and spaceships and stuff in? – but I guess when you think about it it was always going to look like that. Cool that we’ve finally got a picture of one though.

Professor Derek Ward-Thompson from the University of Central Lancashire said the following about the breakthrough:

This is a truly remarkable result. Obtaining an image of a black hole is not as easy as snapping a photo with an ordinary camera.

However, the power created by linking up all these telescopes around the world is immense. It’s the equivalent of being able to see an object on the surface of the Moon that is only a few centimeters across.

Until now, this was the domain of science fiction and artist’s impressions. To be a part of the first team to image a black hole is an amazing feeling.

This achievement stands right up there with any other feat in astronomy.

Right on guys. Stoked for you. Hopefully there’s more where that came from and we might actually learn what black holes are all about in my lifetime, although that’s probably wishful thinking.

For more black holes, check out the first ever object being transported through space via teleportation. Yep, that happened too.