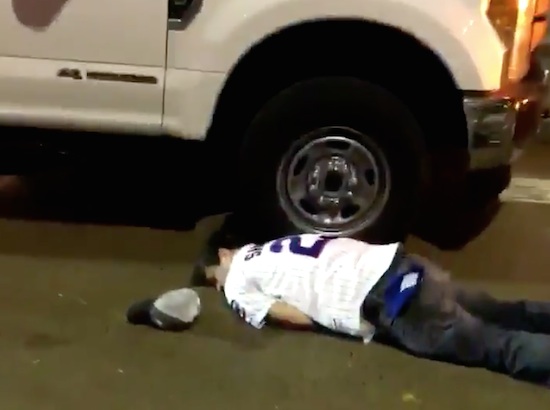 Wednesday night saw one of the craziest matches in baseball history as the Chicago Cubs finally won a world series for the first time in 108 years, seeing off the Cleveland Indians in extra innings in game 7. If you don’t know anything about baseball then trust me when I say it was a dramatic evening.

Although catcher David Ross probably scored home run of the night (in his last ever game after screwing up a wild pitch and allowing two runners to get home), the real biggest hit of the night came after the game during the celebrations. Cubs fans were understandably ecstatic about the win, and it was all a bit too much for Cleveland fans to take (they’ve been waiting about 70 years for a win too to be fair) and it came to a head in the below clip, with one Cleveland fan knocking a Cubs fan clean out.

Home run. That looks pretty bad on the Indians fan, but apparently the guy who got punched – 36-year-old Alan Anderson – was being a real dick to him and even dared him to take a swing at him, so maybe it’s not as one sided as it looks. I bet Anderson really regrets saying that now, as it’s probably going to be another 108 years before he can celebrate another Cubs win again. Just enjoy it man, no need for violence or goading.

For some more completely sick knockouts, check out this compilation of some of the best spinning knockouts in UFC. Ouch.