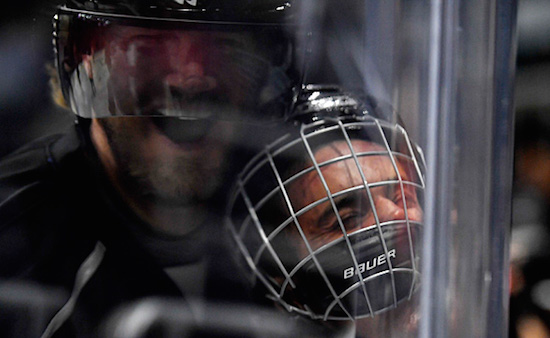 Undoubtedly the best part about the sport of ice hockey is that you’re allowed to legitimately beat other people up on another team, so imagine the joy that the professional ice hockey players felt when they found out that Justin Bieber would be competing with them in the charity all star match this year. I bet they were practically rubbing their hands with glee at the news.

Chris Proctor is a 6’6″ 100kg ice hockey professional and he definitely was one of those people if his actions in the match are anything to go by. In the clip below you can see him slamming Bieber hard into the glass wall of the arena whilst laughing his ass off about it. Bieber looks like he’s in some serious pain too so this isn’t really a joke either:

Ouch. In fairness to Bieber, he got on with it and didn’t complain and actually looked like he was surprisingly good at ice hockey, managing a goal and some impressive highlights, as you can see in the video below:

Not bad right? Pretty annoying that Bieber is actually legit at ice hockey though right? Can’t the little prick be bad at something? Oh yeah, he is – making music.

For more ice hockey, check out one of the most brutal slams we’ve ever seen. Makes Bieber’s check look like a walk in the park.