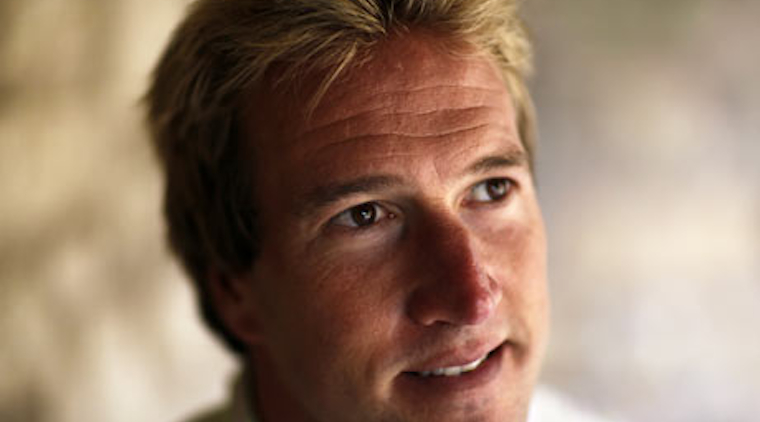 I’ve only done acid once but I definitely didn’t want to jump out of the nearest window or act out a scene from Monty Python. Fortunately for us, that’s exactly what Ben Fogle did so now we can all laugh at him about it.

Shout out to Rupert Downes for first giving us the tip about this story. When you think of Ben Fogle, you probably picture an annoyingly enthusiastic, almost Aryan looking posh presenter who looks about twelve and spends his time bouncing around nature programs with a gimpy smile slapped across his face.

You’re right, he is that guy. He also likes doing really strenuous activities like sailing round the world and contracting necrotising faciitis to prove how ‘out there’ he is, and also to show that he’s got loads of spare time and doesn’t actually need a real job.

But what you probably hadn’t imagined was that this same blonde buffoon is actually a massive wreck-head, and loves doing acid down his local boozer before going on the rampage like some kind of country club Hunter S. Thompson.

â˜› Check This Out Next: Hunter S. Thompson’s Daily Routine Was Completely Insane

OK, that’s not quite true, but he did take acid. Apparently it was all a big accident, which is fitting because he regularly markets himself as an ‘accidental’ something, with book titles ranging from ‘The Accidental Adventurer’ to ‘The Accidental Naturalist’. Clearly he’ll try anything as long as it’s an accident.

Anyway, the story is that Fogle was down the pub last Friday with his family, quaffing a glass of rouge and no doubt guffawing wildly into the night about a variety of interesting topics. It was like any other Friday night. When Fogle got home he put his kids to bed like he always does, except this time he started tripping balls in a big way.

â˜› Curious? How To Have An Acid Trip Without Actually Taking Acid

Referring to it as a ’psychotic episode’, Fogle said “I was acting like a stereotypical madman. I thought I was going to die”. Then he went on to describe the experience further, saying “I picked my daughter up and she felt incredibly light, like a grain of rice. I suddenly had this compulsion to jump through a window”. Woah, you’re wasted bro! He also stated that “it was like having an out-of-body experience” which is probably the dumbest thing anyone could ever say regarding taking acid. I mean what the hell else is it supposed to feel like, that’s the whole reason people take it in the first place.

Fogle then acted out a scene from Monty Python, before his wife managed to enlist the help of some friends to restrain him, which presumably wasn’t very difficult. Things started getting less fun for Fogle at this point though as he stated that ‘“I thought I was doomed, I thought I was going to die.” Bad trip dude.  He was later treated at hospital and the doctors were almost certain his drink was spiked with LSD. Fogle retaliated by posting the following wussy status updates on his twitter account, which is probably the most predictable response in the history of predictability: 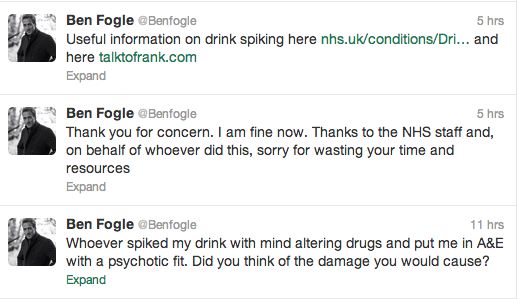 The moral of the story? Ben Fogle is a massive, weeping pussy. No news there then.