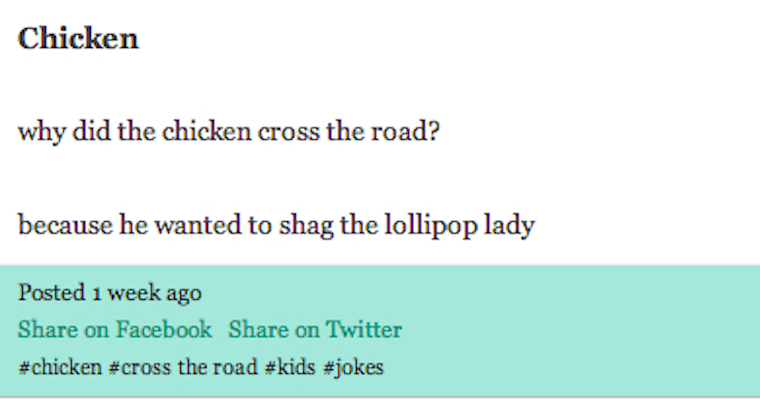 So yeah shout out to my girl Aleksandra Bilic for this one. She actually used to write for Sick Chirpse a while ago and her best piece was probably this one that called out that whole stupid Kony 2012 stuff as bullshit right from the off but then she got a real job or something so had to stop, which is fair enough. If she’s reading this, sorry I didn’t wait for you at the Vice party but we waited for you to come back for seriously ages so we just gave up and figured we would run into you later but it didn’t happen. Sorry about that. Next time. But yeah onto this Tumblr then and I think this might just be the best one we’ve ever featured. And what’s crazier is that it doesn’t even feature loads of cool photographs like most tumblrs do. This is all words baby.

It’s called Bad Kids Jokes and it’s explained like this by whoever runs it: ‘I moderate jokes on a Kids Jokes website. A lot of joke submissions can’t be published because they’re offensive (to kids, or to parents who would hear them repeated at home), or they don’t make sense… so I publish them here instead. I have not edited or made up any of these jokes’ and that’s it. I don’t really know what a Kids Jokes website is but moderating it and using the ones you’re not allowed to publish for your own super cool tumblr seems like one heck of a job. Almost as cool as running Sick Chirpse. Probably cooler actually.

Anyway, you’re probably thinking it doesn’t sound that good,  but let me tell you that I don’t think I have laughed as much as I have over anything as when I was checking out this tumblr yesterday. It is seriously so stupid and so funny. I’m just gonna copy and paste a bunch of my favourite jokes from it below, but if you like the looks of these (and if you don’t then you’re an idiot/not funny) head on over to Bad Kids Jokes and check out some more. It’s updated daily so you’re guaranteed to never get bored, especially with some of the shit these kids come up with. I really hope it is kids and not trolls because the site is kinda popular so could easily attract trolls, but here’s hoping in the spirit of Christmas that it is actually the kids themselves and not some idiots with nothing better to do.

Here are some awesome jokes (all spellings as submitted, not mine):

beacuse they have long hair and there stupid.

do you know who else has a stinky pile of butts ?

why did all the chickens stop?

what did the banana say to the uther banana?

Have you got a potty because I need a pee desporatly please!

No because we are at the beach. We will need to go home by a banana taxi we dont have a car.

why did the farmer sleep on his bed?

because all the animals took his pants off

I have a butt.

Sir we all have butts

Mr.stu was stupid. Mr.stu was working at the office after, a man arrived and said it is your break then he broke the whole building and from that day he was the president

Q.what did batman say to robin before they got in the car

A.get in the car

What does your mum need to make her fase very dirtey?

how meny kicks dus it take to brake a bed?

why did the chicken cross the road?

because he wanted to shag the lollipop lady

a lady named lucy had a dog named boobs

mum; we can eat camels you know honey
dad ; SHUT UP AND GET YOUR TURKEY SCIENCE BOOKS

docter docter i have worms in my garden

you are doing youre nails.

man: i just have a cold

doctor: oh yeh, im not a doctor, im a builder

anser
c) run to a chainsaw

what do u call a dickhead

Told you these jokes were special huh?