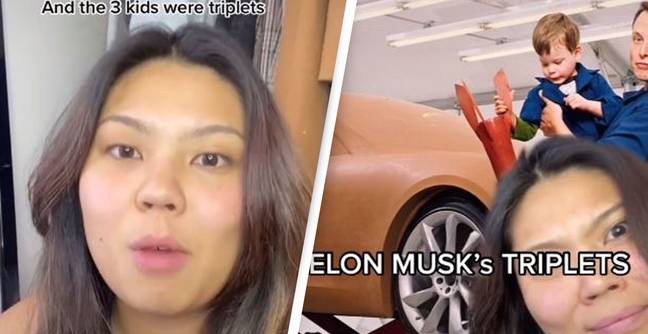 She had no idea they were his.

Everyone knows that Elon Musk is one of the two richest men in the world – kinda depends what day of the week you catch him on – and I’m sure most of us wonder from time to time what kind of special privileges you can access being the richest man in the world.

Well, thanks to TikToker Ai Yamato, we’re going to hear a story about what it’s like to babysit Elon Musk’s triplets for the weekend, which kinda gives you a little bit of an idea about what life is like with however many billion dollars in your back pocket. Check out the story below:

Reply to @cian..007 wow just wanted to say thank you guys for joining this journey 🤧🥺✨

One day I went to babysit these two kids I had been babysitting for quite a while and the mom informed me that the two kids were having a sleepover with three other kids, who were triplets.

For the most part the kids occupied themselves playing Mario Kart, hanging out by the pool and playing video games.

Thank God the dad was working from home so it wasn’t like I was in charge of five kids.

These kids were very health-conscious at such a young age.

I was expecting a Johnny Rockets [a diner-style restaurant chain] but they were like ‘let’s go to Whole Foods.

It was only the next day that I found out they were Elon Musk’s children.

Kai was definitely the most talkative and he was very bubbly and energetic.

They were all polite, not brats not spoiled, they were very well mannered.

I’ve looked after a lot of kids, these kids were the most well-behaved kids I have ever had the pleasure of babysitting.

Wow. That isn’t actually that great a story but I suppose it would be pretty nuts if you just thought you were babysitting some regular kids and it turned out they were the richest babies in the world. Kinda cool to see that they don’t have some elite class of babysitter that they use as well. They’re just the same as me and you essentially – except they live in way bigger houses.

Also kinda nuts to think that Elon Musk might actually be a good father and raising his children correctly and not the hyper weird macho asshole that he portrays himself as on social media and in the public eye. Or maybe that’s more the work of the children’s mother Justine Wilson, who I assume has custody most of the time and the children have pretty much been raised by? That’s probably it.

Regardless though, it is kinda reassuring to see that the children of the richest man on the planet aren’t complete and utter assholes. You wouldn’t have bet against it, would you?

For more of the same, check out when Musk said he wired up a monkey’s brain to play video games. Cool man.