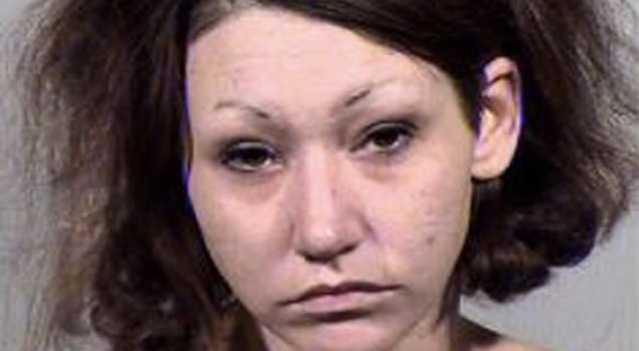 Responsible parenting 101 by someone who is almost certainly a meth addict.

It’s probably a regular occurrence when you’re looking after a little kid for them to shit where they’re not supposed to shit, but even if you’re advocating the principles of tough love then you probably shouldn’t push their faces down into said shit and make them eat it, should you?

Clearly Nicole Candelaria from Arizona didn’t get the memo on this though as that’s exactly what she did to her boyfriend’s 3 year old daughter when she shat in the bath tub last week. Following that, she also made her kneel in front of the toilet and scrubbed her mouth out with toilet water. I’m not entirely sure if that would make her mouth cleaner after eating shit, but hey at least the though was there right? Maybe she does have those paternal instincts after all.

Unfortunately for Nicole though, the three year old and her sisters were tell tales and told their birth mom all about what they got up to when they stayed with their daddy and Nicole. After a medical examination when the doctors found bruises on her chest, back, sides, and legs, Nicole was picked up and thrown in the slammer, awaiting trial on one count of domestic child abuse.

In her defence Nicole has stated that the child is a habitual liar and the injuries occurred while the couple were play fighting during the week, which sounds 100% realistic right? I mean would you trust what the woman at the top of the picture was saying? I don’t want to allude to anything in this article, but check out the link below if you don’t get what I mean already. Seems fairly obvious what’s going on, and the fact that they’re from Arizona makes it even more likely really doesn’t it?

â˜› Check This Out Next: More Than Meth – Faces Of Drug Addiction