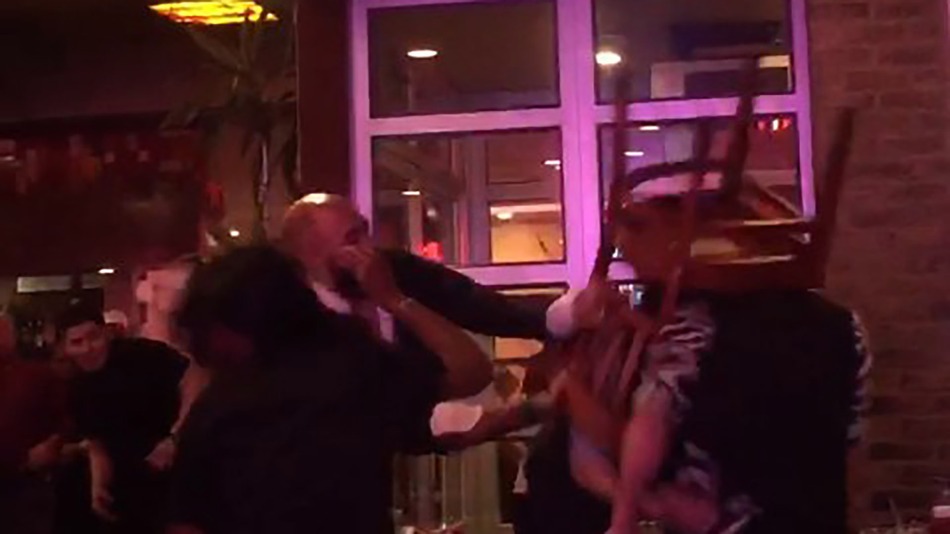 This happened on Tuesday night in NYC at a place called the Dallas BBQ, and if any of our American readers can identify the attackers then victims Jonathan Snipes and Ethan York-Adams and I guess anyone else who sees this would appreciate it.

Apparently Snipes and Adams accidentally spilled a man’s drinks on their way out of the restaurant, and two guys at the table started making homophobic remarks. Here’s what went down as told by DNAinfo New York:

One of the men stood up and escalated the verbal confrontation, Snipes said. “He turned it into a physical altercation very quickly,” he added.

The man knocked Snipes to the ground and started kicking his face and spine, knocking loose one of his teeth, snapping the cartilage in his ear and bruising his head, he said. He shouted, “Take that, faggot,” according to Snipes.

Onlookers shouted “Stop! Stop! Stop!” according to a second video posted to YouTube by Isaam Sharef, who also took the Instagram video. “At some point, the guy stops kicking me in the face. He’s won,” Snipes said.

“[York-Adams] gets me up. But as he tried to get me away, that’s when the other dude hits him with the chair,” Snipes said.

For some reason this isn’t being treated as a hate crime, I guess because you could argue the drink-spilling sparked the whole thing off but then again, surely if you’re calling someone a “faggot” while beating them up that’s a hate crime no matter how it started?

Anyway, here’s hoping these pricks get brought to justice. Gay bashing in 2015 – you might expect that kind of thing in Russia, but not in a modern restaurant in the middle of a New York.