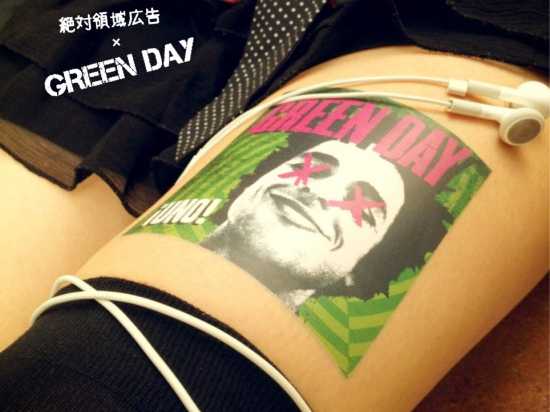 A company in Japan has starting painting adverts on women’s legs to sell their products to perverts. Even Green Day have got in on the act.

In Tokyo, Japan, a PR Company has started putting adverts on women’s legs. It all started when Public Relations consultant Hidenori Atsumi realised how he could turn people staring at someone into a profitable venture.

The women have to be aged 18, and their job is to walk around Tokyo for eight hours each day with the chosen image painted on their thighs, they’ve even been used to advertise for Green Day.

As well as being over 18 Atsumi requires his walking billboards to have at least ’20 connections’ to people on social network sites. Atsumi advises the girls to post pictures of the adverts online (probably due to the higher amount of perverts there are on the internet), and he encourages his girls to wear miniskirts as it’ll make them ‘more alluring. It is also probably due to the increased amount of space, if he’s lucky he might be able to fit two adverts on there.

On his revolutionary new advertisement plan, Atsumi said: ‘It’s an absolutely perfect place to put an advertisement as it is what guys are eager to look at and girls are okay to expose’.

‘Girls are okay to expose’, not really a line you’d expect to hear and to hear it worded so nonchalantly is a bit odd. Is he right though? In the Western World we’ve used women’s bodies to advertise all manners of things from sandwiches to perfume. Maybe this isn’t so odd and it’ll catch on around the world.

Next time you’re leering at a poor girl and you feel the sudden urge to watch the latest crap blockbuster or buy the new McDiabetes, it means it has happened: Atsumi’s won.