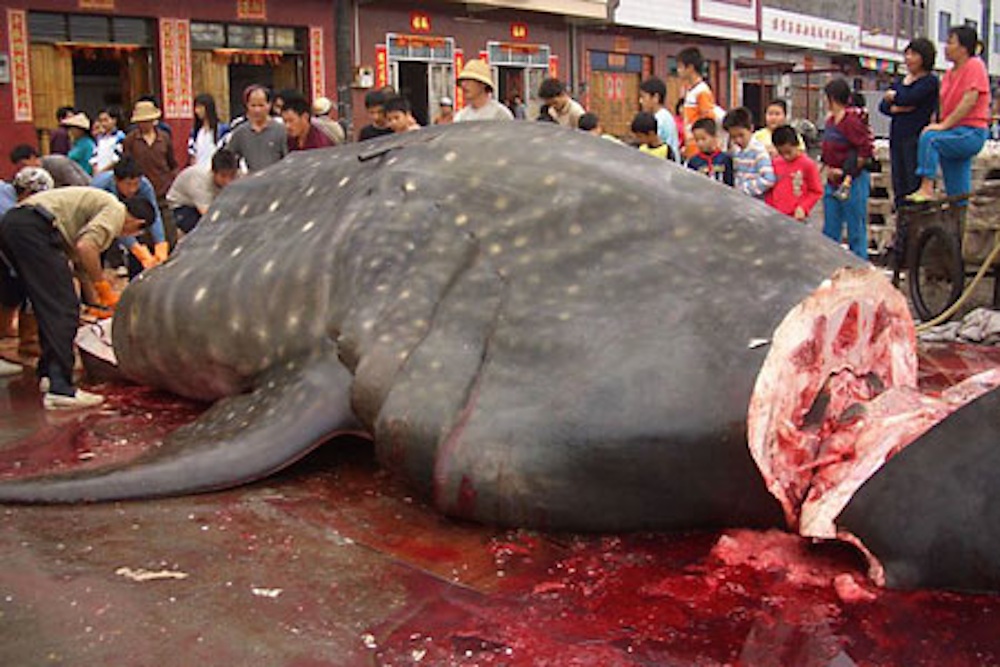 This is one of the most upsetting videos weâ€™ve ever watched. This needs to be stopped, now.

This might be one of the saddest and horrific videos we’ve ever featured.

It’s absolutely horrific that this is even allowed to go on and does go on. Well in fact, it isn’t allowed to go on – giant whale sharks are a protected species under international law – but these asshole Asian fishermen decide to do it anyway because each carcass of a giant whale shark is worth about $30,000. An investigation by WildLifeRisk discovered that this practice was going on regularly at a factory in southeastern China, with about 600 of these great whale sharks being chopped up like this per year.

Now, I can kind of understand them doing it if the shark was at least dead – I’m not critiquing the mentality behind the entire fishing industry here – but to chop it up whilst it’s still alive and kicking is absolutely barbaric and really shouldn’t be allowed or condoned. I mean if they’re going to do this they could at least kill the shark first or start with its head, because slowly chopping up your body is absolutely sadistic.

I’m sure people will ask why we’re sharing this because it’s so messed up and gross. The answer is simple: to raise awareness that this is happening and that it’s real. It’s unlikely that if we just wrote a story about it people would be as affected but if they see it there in the flesh then they can’t exactly deny it can they? I mean everyone went absolutely mental last week about Cecil The Lion but the fact is stuff like this is happening right now and nobody is turning a blind eye because they aren’t even aware of it.

I’m not really sure how we can help in stopping this, but hopefully something can be done about it soon because it’s absolutely horrific to treat a live animal like this. I’m sure a bunch of vegetarians will say it’s no different to factory farming and whilst they do have somewhat of a point there in that animals aren’t treated well there either, this really is the next level of cruelty.

The Chinese certainly have the MO for practices like this though – just check out bear bile farming for even more examples of how animals should never ever be treated.