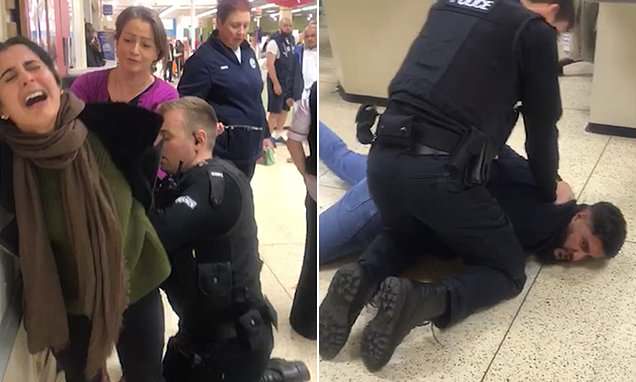 This is one of the weirder stories we’ve covered in recent times on Sick Chirpse, as you can probably tell from the headline.

It concerns Nasir Hussain and Mahira Hussain who were attempting to buy a trolley load of Volvic water from Tesco in Rochdale on Tuesday night, when they were told that they were only allowed ten bottles each. They kicked off upon hearing this and the whole situation descended into insanity as you can see below.

You can read Nasir’s take on the situation below that too:

To be honest I’m absolutely shocked something like this could ever happen. From a young age I’ve always thought if you have a problem, call a police officer. I don’t think I will ever ask a police officer for help again in my life.

The water was just for home, my missus drinks two litres of Volvic a day. She’s a secondary school teacher and the bottled water is kind of her trademark, she’s very popular at the school.

We’d already put half the bottles through the checkout when the manager said you can’t take that many.

I was embarrassed because there were a lot of people in the queue and I did get annoyed but I was just trying to explain that other Tescos had sold us the same amount in the past and it wasn’t a problem. They had loads of water left on the shelves but the manager said call security.

Then I saw the police officer and called him but as soon as he came over I got this sinking feeling in my stomach. He wasn’t interested in hearing my side of the story.

He arrested me and my partner without warning and used excessive force, I think he lost the plot. I was trying to buy something from the shop, not steal something and I got arrested.

The worst part for me was being on the ground while they were arresting my partner. I couldn’t do anything to help her, she’s only 5ft 1in as well, very petite. She wasn’t posing a physical threat to anybody.

When my dad heard about what happened he said I should’ve just stayed quiet, but when he saw the videos he changed his opinion. My whole family is in shock.

I don’t know how they’ve charged us for this. I’ve never been convicted of anything in my life or had a punch thrown at me but I think if you’re going to bully people and use excessive force then people have a right to defend themselves in that moment.

I can’t remember everything that happened but if the officer got hurt then he either did it to himself or it happened accidentally as I was trying to defend myself. Neither of us attacked the officer.

OK. Let’s take all that in for a minute. Whilst I do think it’s a bit weird that these guys were buying fifty bottles of water and that they had already done it at a different Tesco the day before and knew it was OK ‘up and down the country’, you’ve gotta admit that the police reaction seems a bit excessive. Having said that as well I don’t think the guy did himself any favours by being a smart ass to the policeman as everyone knows that you can’t be like that when the boys in blue turn up.

Still, completely outrageous from the cops to treat them like that. Will be interesting to see what happens as the pair have now been charged with assaulting a police officer but the video seems to show something very different. Stay tuned.

Aside from that though, considering Nasir describes himself as an ‘online retailer’ and regularly travels the country buying Volvic in bulk, it seems fairly clear to me that he’s selling it online at a slightly increased rate or up to something dodgy with it. No way any woman drinks that much water. Not buying it. I don’t really think it’s Tesco’s job to not sell them that much though because they can do what they want with it. Just let them get on with it.

For more cops being assholes, check out this NYC cop pummelling a kid into oblivion. Hot damn.