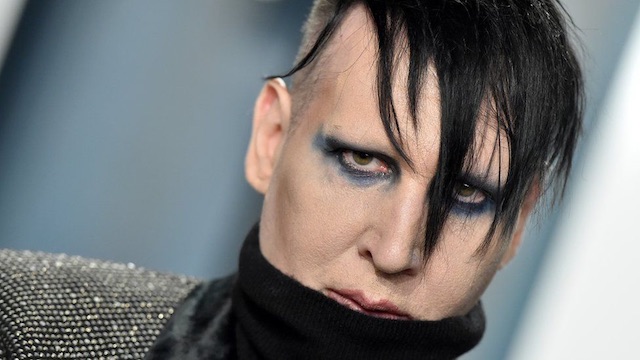 A whole bunch of women came out with stories of some of the horrific abuse that they had been subjected to at the hands of Marilyn Manson, but it seemed unlikely he would actually ever face any criminal repercussions for his actions despite being dropped by his label, management and booking agent.

Surprisingly, this might not actually be the case though as we’re hearing now that a warrant has been issued for Manson’s arrest – however bizarrely it’s not actually anything to do with the recent allegations that have been levelled at him. Gifford Police Department in New Hampshire have announced that Brian Warner – Manson’s real name – is wanted in connection on two counts of Class A misdemeanour Simple Assault.

The incident took place back in 2019 when Manson allegedly assaulted a videographer during one of his concerts at the Bank of New Hampshire Pavilion. Here’s what was said in the Facebook post from Gifford Police Department:

That all sounds pretty serious, but when you find out what actually happened then the whole thing just sounds like a complete and utter scam. Basically it sounds as though this videographer is claiming $35,000 in damages after Manson accidentally spat on him during a gig. Seems a bit much right?

I guess that might be pretty gross if Manson full on Triple H spat in his face, but even then I don’t think the guy need $35,000 compensation. It’s also a Marilyn Manson gig so you would expect it be a bit raucous when you signed up for it wouldn’t you?

This is exactly the train of thought that Manson’s attorney Howard King decided to take when releasing a statement too:

It is no secret to anyone who has attended a Marilyn Manson concert that he likes to be provocative on stage, especially in front of a camera.

This misdemeanor claim was pursued after we received a demand from a venue videographer for more than $35,000 after a small amount of spit came into contact with their arm. After we asked for evidence of any alleged damages, we never received a reply.

See, wasn’t even getting spat in his face, it was on his bleeding arm FFS. Pussy.

Not that I’m condoning any of Manson’s sexual misconduct allegations, but this really does seem very frivolous in comparison and probably wouldn’t have even gone anywhere if it wasn’t for those being so prominent in the media recently. Concentrate on the real crimes here you useless cops.

For more of the same, check out everything that Mariling Masnon has been accused of this year. Absolutely horrific.