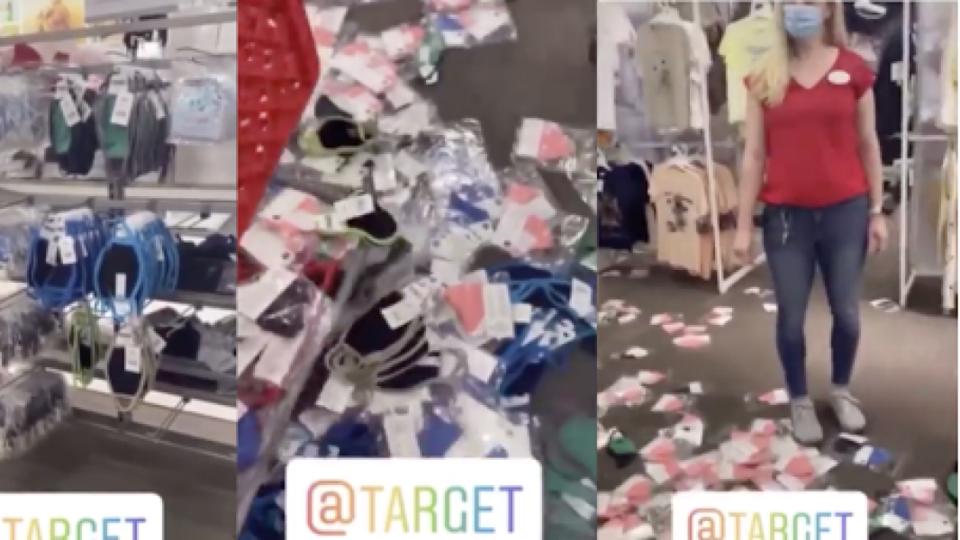 I know I open up a lot of these articles by saying that what I’m about to write about is one of the weirdest tangents during the lockdown, but I genuinely think that the whole anti mask movement is something that I just can’t get my head around. Why are people so dead set against wearing them that they become violent and aggressive when anyone suggests it? So weird.

The latest video surrounding this phenomenon features a woman from Arizona who was so offended by the fact that Target had a display of facemasks that they were selling that she decided to film herself attacking it. Then in a later video that she also decided to share, police are called to her house and arrest her but she defends herself by saying that she’s Donald Trump’s spokesperson and works for QAnon.

What the hell is wrong with people?

…then she got arrested on IG Live saying she is a spokesperson for QAnon & the White House and to “call Donald Trump and ask him” because she can’t share any “classified information.” pic.twitter.com/Bg1OPaimUQ

Yeah that really is something else? I suppose we shouldn’t make fun of this woman as she clearly has mental problems because there’s no way you can be of a sound mind and think these things.

Turns out that these incidents were part of what sounds like an actual breakdown after this description of the full Instagram story that was posted on Reddit:

Her entire story was from 8 Am (ish?) – 2 PM? The husband wants a divorce and kicked her out, so she went to a hotel. Went to Target, tried destroying it, and got kicked out. Got an Uber back to her hotel. Immediately went shopping, bought thousands of dollars worth of stuff using daddy’s credit card (literally). Was eventually stopped because she refused to wear a mask. Got kicked out of the hotel, walked around with hats ON HER FEET because she apparently lost her shoes. Got another Uber to her house. When she went into her house, her Range Rover was there (somehow) and she tried to leave. The husband stopped her, took her purse away to keep her there. Called the cops. Told the cops how much of a threat her husband is, told them he had unregistered guns, anything to get HIM arrested Then here we are.

Sounds like a hell of a day? Hopefully she gets the help that she needs because that does not sound like a fun day for her in the slightest.

For more of the same, check out this shopper beating someone up with a sausage for not wearing a face mask. Damn.