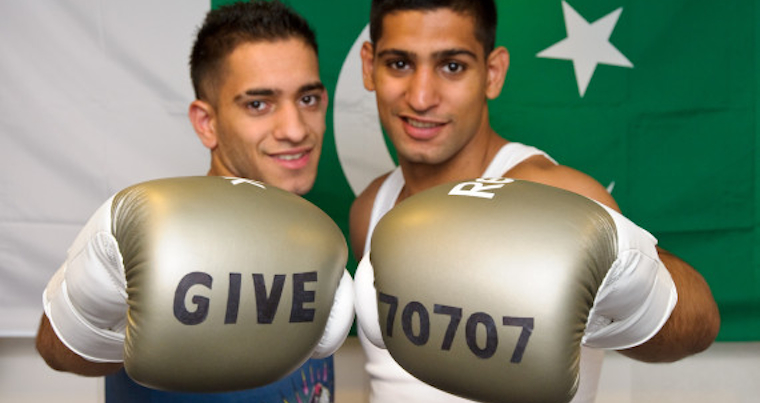 Amir Khan and his soon to debut boxer brother Haroon were on a night out in Birmingham over the weekend to see Asian superstar Rahat Fateh Ali Khan (who?!) perform at the NIA and indulge in some Shisha in Digbeth’s finest establishment The Moon Shisha Lounge.  As they stumbled back to Amir’s £100,000 Range Rover (as an aside it’s kind of crazy that they went out in Birmingham and it’s kind of implying they weren’t drinking if they were gonna drive to back to Bolton or whatever. I lived in Birmingham for 18 years and to go out there without drinking is like hanging out in purgatory, although I suppose smoking shisha is kinda relaxing and Rahat Fateh Ali Khan was probably so off the chain you didn’t need to drink to enjoy it) they came across a gang of youths who were trying to steal it.

Big mistake assholes. If you were going to steal a Range Rover off someone make it off some rich banker or something, not two boxers that are going to kick your asses. Apparently the gang tried to use a 4X4 car to block the brothers from reaching their car but the Khans weren’t having any of it and fought back.

Here’s what one eyewitness had to say about it: ‘One (of the men) slapped Amir and clipped him on the lip but Amir pulled back and knocked him out cold. Then five of them went for Amir and Haroon but they stood their ground and these guys got dropped one by one.’ The eyewitness also commented that the Khans were completely blameless in the situation as even though they handed these fools’ asses to them all they were doing was defending their own property, which is obviously perfectly legal. Following this the Khans headed back to Bolton probably feeling completely braps over the fact that they had beaten up some idiots who had tried to rob them – that’s a pretty good feeling, trust me.

However, that bravado was soon diminished upon their arrival back in Bolton when their dad Shah Khan wasn’t happy with the actions of his sons. He offered the following statement on the event that is somewhat confusing in its repetition: ‘I’ve told them it takes a bigger man to walk away. Let them have the car. It happened, it is over. In reality, if they wanted the car, they could have it. It’s insured. You should walk away, turn away. It takes a bigger man to not get involved. But they are OK and everyone is OK. They are young, they are healthy, Silly things happen, silly people are out there.”

I don’t know if he was including the thugs who got battered by the Khan brothers when he made that statement but I think if I got sparked out by Amir Khan I would probably be feeling it a couple of days later. Haroon Khan had the following (retarded) statement to offer from his twitter account: ‘Found out guy didn’t have no £££ to pay for his shisha so he tried robbin us. Didn’t get far.’ Probably been hit too many times in the head, huh? Or maybe he’s been too strictly disciplined by his clearly authoritarian father when he was growing up?

Apparently Amir Khan is having a comeback fight fairly soon and Haroon Khan is set to make his professional debut sometime as well but I’m not really that interested in boxing so I don’t know when either of those events are happening. What I do know is that it appears that Shah Khan holds most of the cards in the Khan household and it’s kind of lame that Amir and Haroon are still completely owned by him, despite the fact they can own almost anyone in the ring AND on the street. You think he took the keys for the Range Rover away for a week after this?