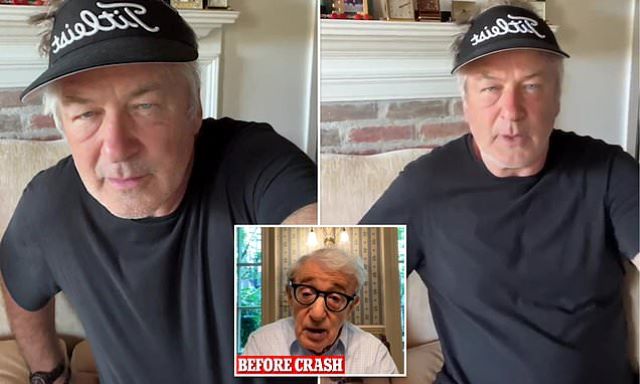 At least he didn’t shoot him dead.

If there’s one thing we’ve learnt these last few years, it’s that Hollywood actors are not normal people. Take Alec Baldwin for example. He literally killed a co-worker on the set of his new movie while handling what he thought was a prop gun, and now here he is a few months later interviewing Woody Allen on Instagram; a celebrity nonce who groomed his own stepdaughter and married her once she was of age. I mean – what planet are we all living on?

Naturally, none of these topics were brought up in this bizarre conversation between Baldwin and Allen on Instagram the other night. I don’t even know why this conversation was happening, let alone being streamed on Instagram, but it was an absolute disaster in any case:

Inexplicably interviewing Woody Allen on Instagram Live, watching as Woody loses Wi-Fi, and then getting up to yell something in Spanish that I a native Spanish speaker can’t understand has surpassed Schweddy Balls as the new funniest thing Alec Baldwin has ever done. God tier. pic.twitter.com/C3a5tzvzmt

As transcribed by MailOnline:

Alec Baldwin has been mocked over his Spanish after he roared at a staffer about barking dogs during a chaotic live chat with Woody Allen.

The Hollywood actor, 64, got up of his couch to upbraid an unseen staffer called Leonetta during Tuesday’s interview – which saw 86 year-old Allen admit he’s considering retiring from movie-making.

That translates as: ‘Leonetta! Leonetta! Enough! The dogs! Enough. The dogs. That’s enough!’ …

But the Instagram event – for which Baldwin turned live comments off – quickly turned farcical due to multiple Wi-Fi disruptions at Allen’s Upper East Side mansion.

During the second of three outages, the notoriously hot-tempered Baldwin FaceTimed a woman who was with Allen.

‘Are they in the room where they have the best Wi-Fi?’ He grilled. ‘This is the second time they’ve shut down.

‘They need to be in the room with the best Wi-Fi in the house. What have they got going on there?’ Baldwin continued.

And further unintentional comedy ensued seconds later when Allen appeared back on screen with a female helper who said: ‘We just opened a door, it might make a difference.’

In fairness, we’ve all had nightmare experiences with our internet connections on Skype and whatnot, but then again we’re mere mortals, not multi millionaire celebrities with dozens of hit movies and TV shows under our belts. Here’s the general reaction on Twitter:

All in all, I think we can all enjoy the fact that these two Hollywood icons even attempted to pull this off without embarrassing themselves, as if they don’t have enough dramas to deal with in their lives already. Probably the funniest thing either of them have done in years, to be fair. Maybe they could make it a weekly thing?

For chilling footage of the ‘Rust’ shooting and the moment Alec Baldwin discovered he had killed his co-worker, click HERE.