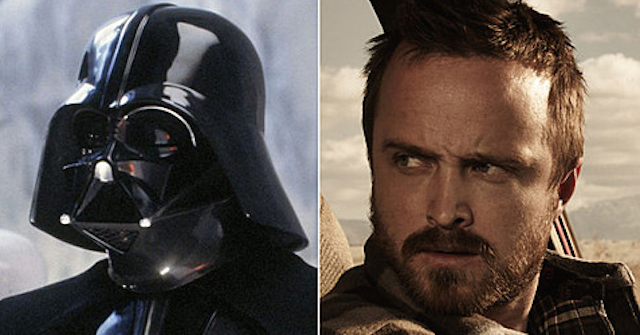 Aaron Paul couldn’t contain his excitement last night when he tweeted that he would be playing Luke Skywalker in The Empire Strikes Back.

Wait, what? I thought that Mark Hamill was back as Luke Skywalker in the new Star Wars movie and there wasn’t any plans to reshoot the original!?

It's official! I will be playing Luke Skywalker in Star Wars. Give me my light saber!! Dreams are real my friends. http://t.co/TmPb7ETWKA

Well, it turns out that it’s part of a live reading that takes part in LA organised by Jason Reitman, who directed Up In The Air and Juno. Apparently he organises these shindigs regularly, setting up a reading of a classic movie with today’s actors to ‘re-imagine’ it or something. It sound kinda cool but also kinda meh.

Reitman has revealed some other members of the cast for it, which are again kinda cool but kinda meh:  C-3PO will be played by Stephen Merchant, Dennis Haysbert will play Lando Calrissian, comedian Kevin Pollak will play Yoda and J.K Simmons will play Darth Vader. There’s no news on who will play Han Solo or Princess Leia yet, but Reitman expects Paul will make Luke Skywalker a bit more ‘street smart and reluctant’.

So he’s basically saying Aaron Paul can’t act and will forever be Jesse Pinkman. As stoked as he is about playing Luke Skywalker, I’m sure he’s more stoked about that.