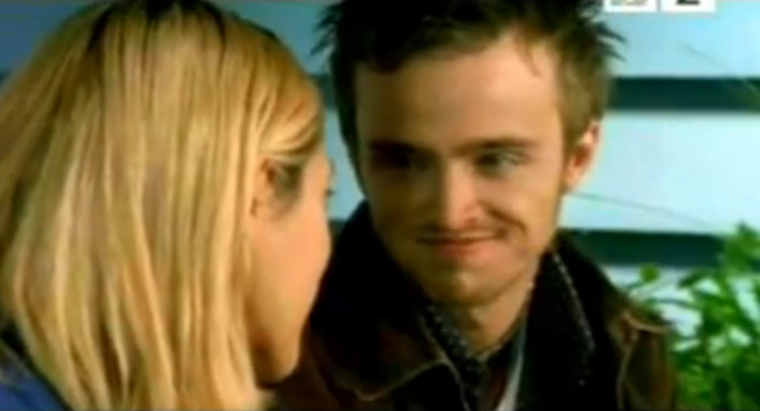 What the hell was Aaron Paul up to before he made it big in Breaking Bad? Turns out he was starring in Dashboard Confessional videos.

So if you read Sick Chirpse then you’ll know we like Breaking Bad a lot and everyone knows that Bryan Cranston was the dad in Malcolm In The Middle before he actually proved he could act by pretty much totally becoming Walter White in the series, but what about Aaron Paul who plays Jesse Pinkman in the series, what the hell had he been in before he stepped into that role?

Nobody really knows, in fact I don’t think anyone really cares because new actors in TV shows come around all the time, I mean who the hell was McNulty before he was in The Wire? And who the hell was Tony Soprano before he became Tony Soprano? Or Don Draper before he became Don Draper? You don’t know because TV producers deliberately pick people who haven’t fronted TV shows before so they’re instantly recognisable and associated with the show, which makes perfect sense right? So yeah, nobody really cared what Aaron Paul was in before that just that he played Jesse Pinkman so well.

Here at Sick Chirpse though we’ve spotted him. Whilst I was trawling YouTube during a particularly emo period last weekend (I was just hanging after the Sick Chirpse birthday party and really gutted that it was over) and checking out all the old emo bands I was into (don’t ask) I stumbled across Dashboard Confessional, who I haven’t really thought about for about ten years. And what do you know, there in the Screaming Infidelities video – which is arguably their biggest song – is Aaron Paul, playing a character who could pretty much BE Jesse Pinkman in the days when he was in Mr White’s chemistry class.

The video itself is one of those annoying music videos that doesn’t seem to exist anymore when they would actually take clips from a film and intersperse them with footage of the band playing. I’m not really sure why anyone thought this was a good idea because aside from promoting the movie via the music video it doesn’t really achieve anything as you can’t really put the plot of the movie into a three minute music video (and you don’t really want to anyway because then people wouldn’t go and see the movie) and so it’s just a bunch of ‘cool’ scenes that don’t make any sense. I’m glad that they stopped making these kind of music videos.

The movie itself seems to be some kind of high school buddy movie – and also stars Nick Stahl who played John Connor in Terminator 3 and was the star of the short live HBO series Carnivale that COULD have been really cool but was just really boring – where the dudes fall out over some girl and their respective heroin addictions. Told you it might as well have been Jesse Pinkman in his early years. Maybe that’s where Vince Gilligan got the idea for Breaking Bad from. The movie is called ‘Wasted’ and it was made for MTV movie which probably explains why nobody has ever seen/heard of it.

â˜› Read Next: Malcolm In The Middle Reunion

Check out the Dashboard Confessional video below: