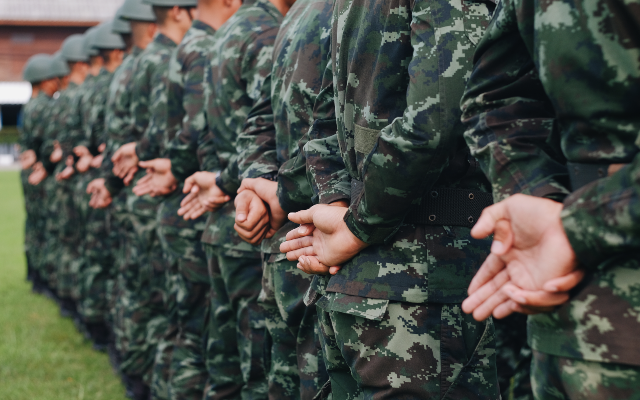 You definitely don’t want to be getting Pitchcapped or Keelhauled.

Throughout the years, a vast array of harsh and downright creative punishments have been used in the military to ensure compliance and to act as a deterrent for would-be offenders. These punishments were not solely reserved for severe offences, with things as minor as not looking smart enough leading to brutal beatings and humiliation.

In this article, we’re going to explore ten of the worst punishments administered in the military throughout the ages that are thankfully no longer used – at least that we know of. The focus will be on non-fatal punishments where death is not necessarily the intended outcome as executions deserve a list of their own.

1. US Civil War – Bucking And Gagging 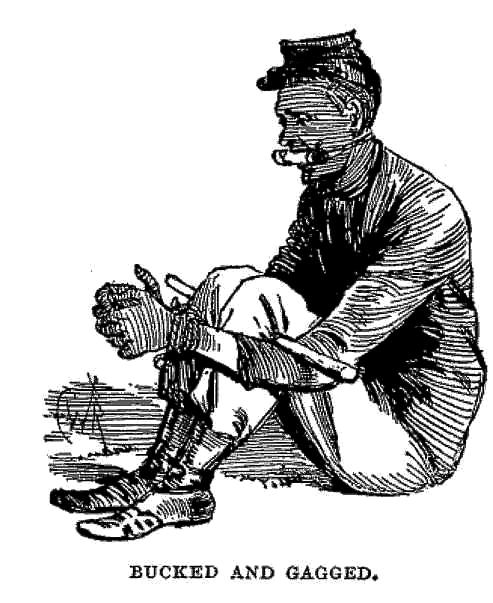 More humiliating than painful, but still very uncomfortable, bucking and gagging was used during the US Civil War on both sides and was employed for mostly minor offences.

The punishment involved the accused sitting on the ground with their knees to their chest whilst their arms were brought forward and tied to their shins. A stick or rod was then shoved over their arms but under their knees to make the position awkward and sometimes painful before they were gagged and left in this position for hours. I can barely sit with my legs crossed for long let alone being stuck in this ridiculous position for hours. Horrible. 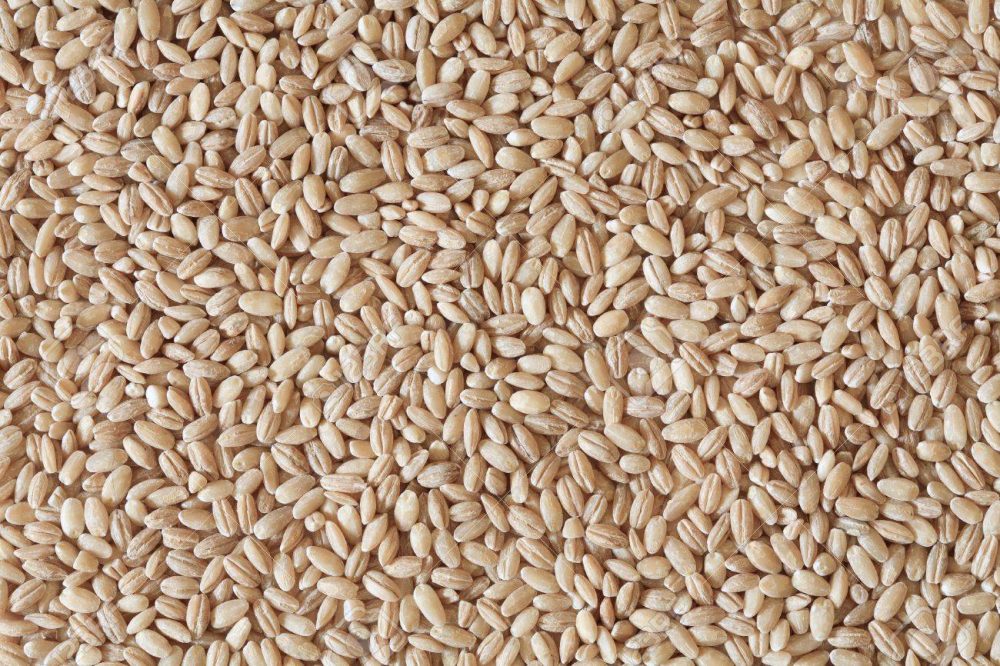 Not as brutal as their executions, Roman soldiers could be fined or have their wages reduced – not too bad at all really. They could also be put on half rations or banned from using water or fire. Pretty much screwed without fire and water in those days.

The more interesting method of punishment was forcing the soldier to eat raw barley. This would rip through their digestive tract causing immense pain.

Banishment was also a popular punishment for the Romans as an alternative to death as the death penalty could only be issued for treason. Banishment was pretty much a death sentence anyway although there was a small chance the condemned would survive. 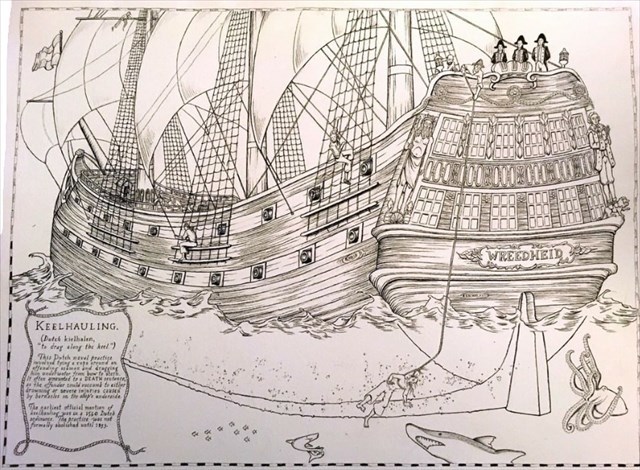 Introduced by the Dutch Navy, Keelhauling is particularly savage in its design. Guilty sailors were tied up with rope, hauled into the sea and then dragged under the ship from end to the other. And these weren’t exactly small ships so you best have been able to hold your breath for a significant amount of time.

Whereas the aim wasn’t to kill the sailor, they often died from drowning (no shit) or the resulting internal injuries.

And let’s not forget the barnacles on the ship’s bottom that would cut the sailors as they were dragged over them. The surviving sailor would then have the scars as a delightful reminder of the punishment. Excellent.

Fortunately Keelhauling was reserved for severe crimes so you had to be more misbehaved than some other minor offences to land yourself this horrific punishment. Thank God. 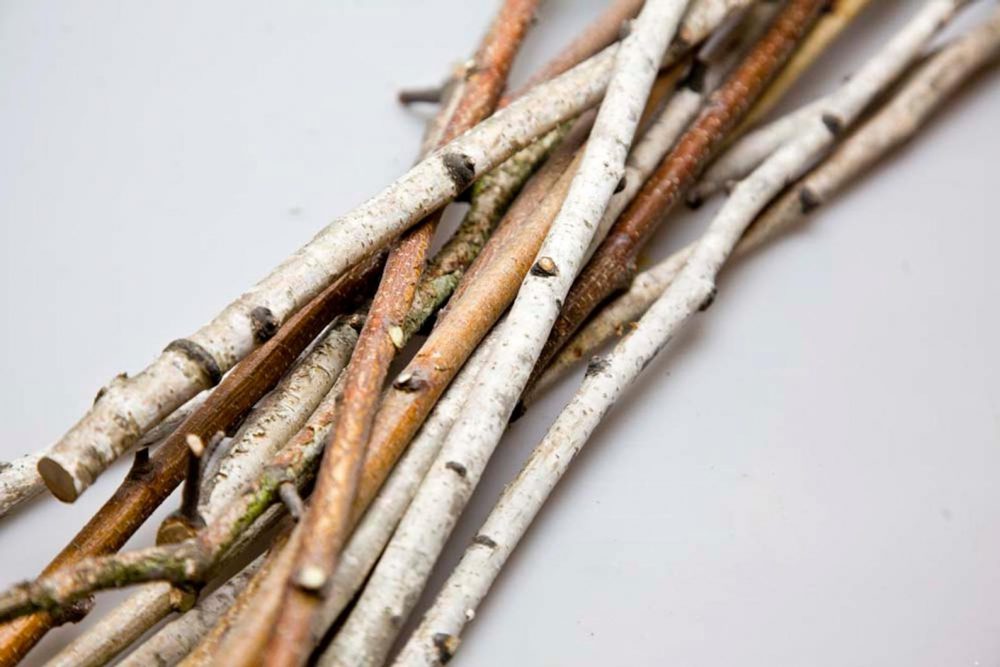 Mainly used for younger sailors in the British Royal Navy, birching was a public act for more serious offences and used to make an example out of people and as such act as a deterrent for others. The usual prescription would be 12 to 24 strokes with a bunch of birch sticks. To add injury to injury, the birch sticks were often hung in the steam of the ship’s galley to make them nice and bendy so knots could be tied in them.

Even worse, sometimes the sticks were soaked in saltwater or vinegar before being used. Literal salt in the wounds. 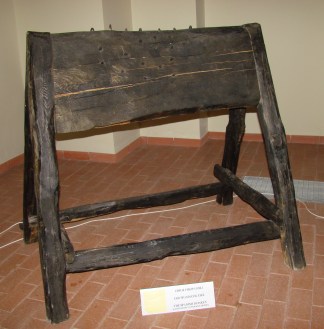 During the US Civil War, minor offences like fighting or drunkenness could land you a ride on the Spanish donkey or wooden mule. The wooden mule consisted of a narrow wooden rail that looked a bit like those horseboxes used in gym class but much more narrow at the top and usually with sharp edges. This was then elevated just high enough so that the guilty person’s feet dangled above the ground.

The unfortunate person would then have to sit on top of the wooden mule and not only that, weights would be attached to their legs and they would be forced to sit for a long while, often until they passed out. Worse still, the wedge would sometimes actually slice through the person. Shudders.

This is particularly brutal and was seen as necessary to keep the often undisciplined soldiers from committing similar wrongdoings. 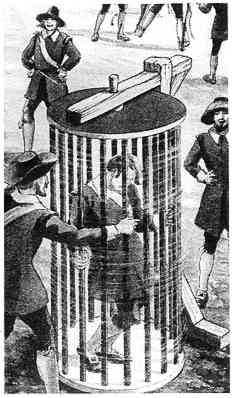 Reportedly used on women and most notably in Tangiers by the British Army, the whirligig was more feared than the stocks and wooden horse which gives an indication of how unpleasant it was.

So many weird and wonderful methods people have come up with in order to torture people in the name of punishment. Funny that nowadays people go on theme park rides that produce the same effect all for the thrill. 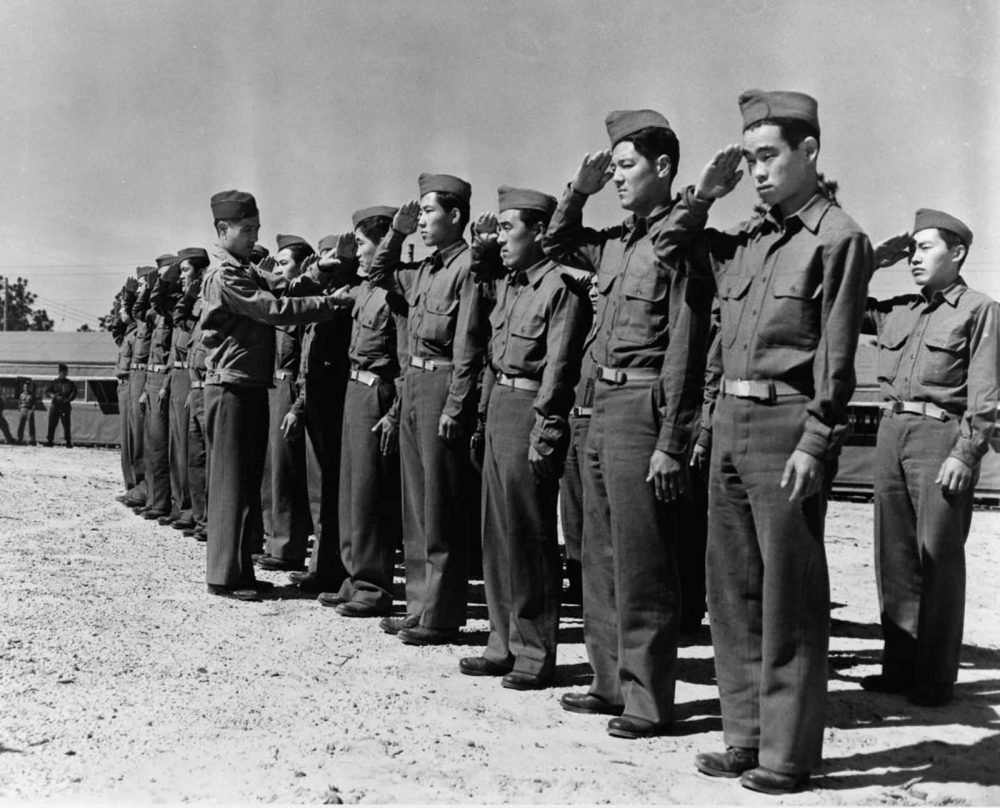 Japan is no stranger to discipline and corporal punishment and during World War 2 had a reputation for being harsher on their own soldiers than the enemy. Physical beatings were the norm and you could be pummelled almost to death for even the slightest infraction.

Failing to salute smartly enough, failure to snap to attention at the mention of the emperor’s name and even something as minor as a missed button on your shirt could land you a beating by fists or piece of wood. Internal injuries as well as teeth smashed out, broken noses and shattered ribs were all common for these unlucky soldiers. 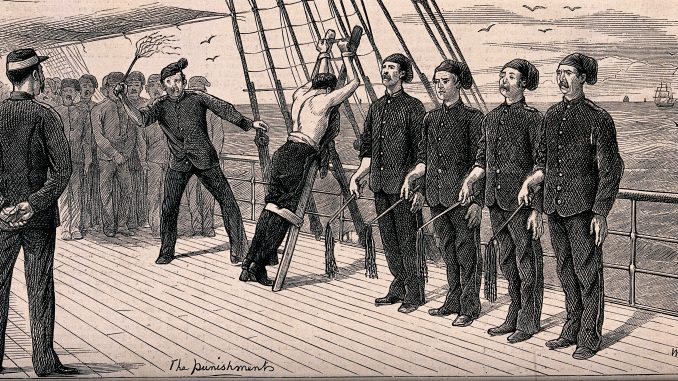 Minor offences committed in the British Royal Navy would warrant a good flogging from superiors. The bare back of the accused would end up red raw after several lashes in front of the ship’s entire crew.

The cat o’ nine tails was made of nine waxed cords of thin rope with a knot at each end and was a favourite for floggings. Each lash would rip into the back of the unfortunate person and cause significant bleeding. It doesn’t stop there though, a method to prevent infection carried on the torture afterwards as the accused would be taken to have salt rubbed into the wounds. Don’t want to even imagine what that felt like for them.

Wanting to share the fun, a variation of this punishment involved the accused being tied to a rack on a ship’s launch before being rowed to the gangway of each vessel in the squadron and a crew member from each ship would hop on board to deliver some blows. The more the merrier. 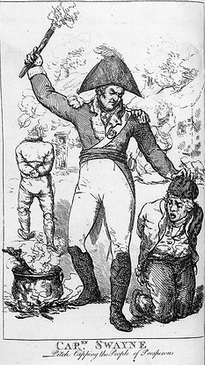 This list doesn’t make the British Military look too peachy and this next one is pretty hardcore. Pitchcaps were mainly reserved for suspected Irish rebels and consisted of a conical hat made of stiff linen or similar. The accused would be tied up and the hat forced on their head. Boiling pitch, a substance similar to tar, was then poured onto the suspect’s head and allowed to cool. The hat was then ripped off their head, taking the victim’s scalp and hair with it.

To spice things up a bit, gunpowder was sometimes added to the hat and set alight after the pitch cooled. Actually horrific. 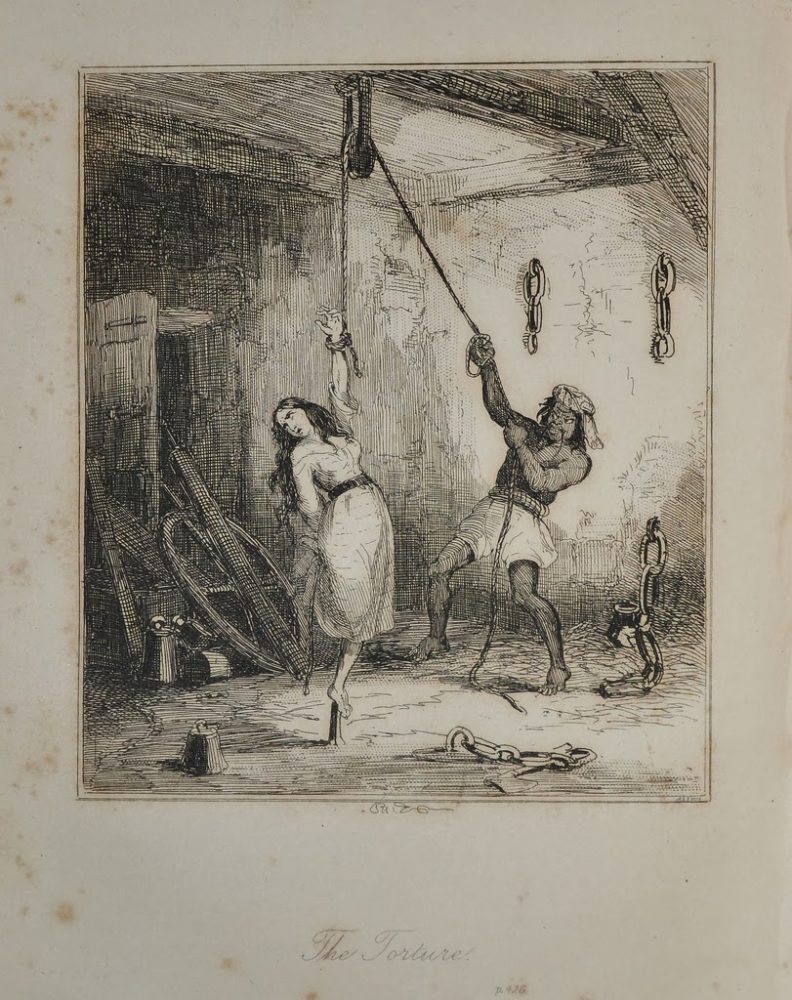 The picket was commonly used for punishment in late medieval Europe, primarily in the military. A stake was stuck into the ground, and the flat end was sharpened to a rough point but not too sharp. The guilty person was suspended above the stake and hung by either their wrist or thumb and were suspended at a height that allowed them to stand on the stake with one foot. The stake was sharpened just enough to cause discomfort but not to pierce the skin.

The accused would stand on the stake until the pain became too much to bear and would then swap over to the rope and pull themselves up to relieve the pain. This would then cause considerable pain to their wrist or thumb and so either way they were in pain and it was quite a twisted method of which was the lesser of two evils in that moment.

Fortunately over the years we have finally realised that perhaps torturing our soldiers isn’t the best method of creating strong armies and instead now opt for more humane methods of improving team-working, loyalty and skill sets of military personnel.

Just be glad the most barbaric torture methods for keeping people in check are a thing of the past, at least in western societies.

For more of the same, check out how intense China’s military training is. Don’t wanna be getting on the wrong side of those guys.