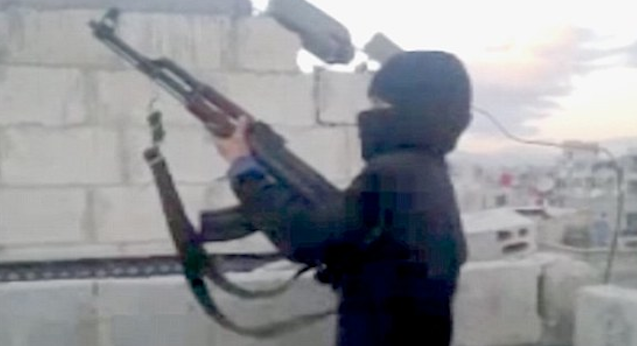 Shocking footage uploaded onto the internet today sees a 6 year old kid, dressed in full ISIS jihadist wear, being trained by an older man to fire an AK47. I guess that’s what ISIS get up to when they aren’t burning down marijuana plantations. They sure aren’t wasting any time with their youth over there are they?

The kid is apparently referred to as a ‘cub cub’ in the video’s caption and was filmed in the town of Ghouta which is a Syrian city outside of Damascus where a horrifying chemical attack occurred last year, allegedly launched by the Syrian government.

It’s well known that every male in ISIS under 15 must go into a Sharia camp – where they are taught about religious extremism and trained in the use of guns and explosives – before they can go into battle as a member of ISIS, but nobody knew that they started training them so young or that they would be so tough. In the video you see the kid fire the gun and even though it recoils pretty heavily he still stays on his feet.

Shocking and disturbing in equal measure.