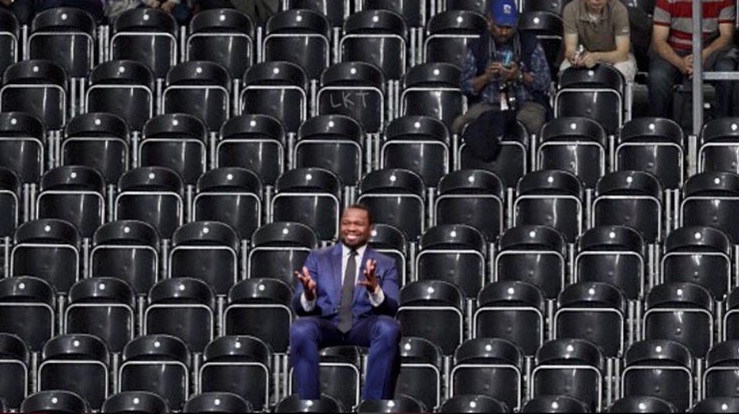 50 Cent seems to like beefing with everyone for no particular reason but one of his longest feuds is with fellow rapper Ja Rule. Neither of them can remember what started it – sometimes they say it’s about Ja Rule stealing some of 50’s jewellery, other times it’s that they had a disagreement when they shot a video – but both of them seem desperate to continue it and 50 Cent proved that over the weekend.

The story goes that 50 picked up about 200 tickets to the Ja Rule show in the front row of his latest concert, so that when Ja Rule looked out from the stage he would be confronted with an empty block of seats with just 50 Cent sitting in the middle. Great prank – even if it did probably cost him about $11,000 to carry out.

Here are the pictures:

OK, so it turns out that those pictures are actually photoshops and this hasn’t actually gone down yet, but the story is that 50 has actually bought these tickets so we should be seeing a very real image of this happening soon. That’s if the story is true and he bothers to show up, but if you really wanted to diss someone and had the means to do it then this is a solid A+ and you really would be a fool to miss out on the opportunity. Don’t let us down 50.

For more of the same, check him out robbing someone on stage one time. Ruthless.