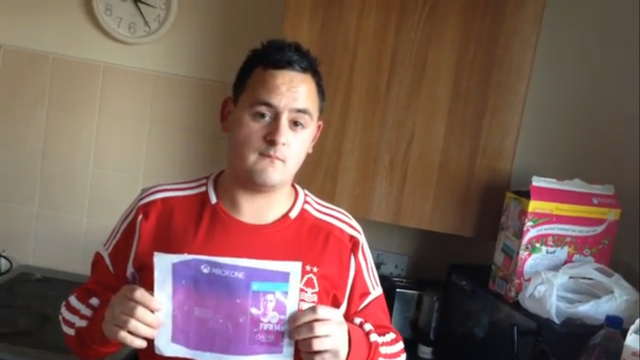 When you’re buying stuff on eBay, make sure you get what you pay for. Or think you’re paying for.

Everybody wants an X Box One or a Playstation 4 – they’re this year’s must have holiday gifts – so it makes sense that you would do whatever you could to get your hands on one, including trawling eBay for some sick deals. Which is exactly what this Nottingham teenager did, only it didn’t work out so well for him.

Peter Clatworhy (19 apparently, although he looks about 35) saw an Xbox One on sale on eBay from what looked like a reputable seller for £458 and decided to bite the bullet. Only when it turned up, it was just a picture of an XBox One. Unlucky mate.

And to make matters worse, it wasn’t even a scam and Peter only has his own stupidity to blame for this as the item was apparently clearly marked as a photograph, but the fact that it was listed in the video games and consoles section of eBay was enough to convince him that it was a legitimate console. Obviously this dude didn’t do too well in his GCSEs, or life in general.

In an extraordinarily dumb interview, Peter explained his situation: ‘I looked at the seller’s feedback and there was nothing negative. I bought it there and then because I thought it was a good deal. It’s obvious now I’ve been conned out of my money’. It’s cool that he finally managed to figure it out, but I think it would have obvious to anyone with half a braincell that it was a scam right from the off.