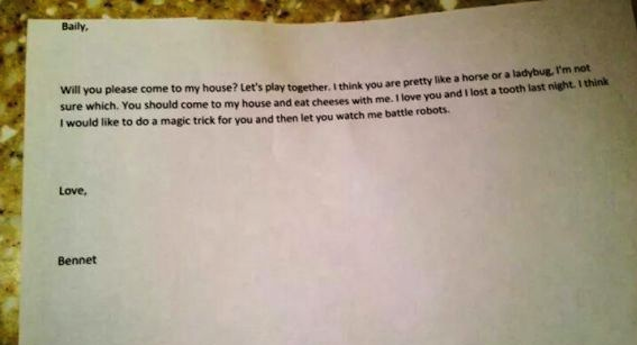 If he’s got lines like this when he’s four he’s gonna be unstoppable when he’s older.

This kid must have been reading our guide to chirpsing girls because he has got some serious game – and what’s even better is that he’s still only 4 years old.

His mum stuck it up on Reddit after she had been instructed to type it out for him and insisted that she didn’t give him any help with it. If you can’t read the picture above because it’s too small, here’s the full text:

Will you please come to my house? Let’s play together. I think you are pretty like a horse or a ladybug. I’m not sure which. You should come to my house and eat cheeses with me. I love you and I lost a tooth last night. I think I would like to do a magic trick for you and then let you watch me battle robots.

Wow, where the hell did he learn to chirpse girls like that eh? You would think he was an absolute killer and that Baily was over there eating cheeses with him in no time, but it turns out he might have come on a little strong according to his mum:

Of course Baily is a bit awkward at just 4 years old and really doesn’t know what to think about Bennet. Honestly, I think he overwhelms her a bit.

What a fucking bitch eh? Girl doesn’t know how good she’s got it with a guy like Bennet doing magic tricks for her. He’s got a lifetime of girls being completely weird to look forward to though so I suppose he might as well start early at the age of 4 .

There is some good news for him though as Baily has agreed to come to his 5th birthday party in a couple of weeks which has the theme of knights and princesses. Bennet is said to be really excited that she’ll be dressing up as a princess but if he wants my advice he should just ditch this bint and take his love letters somewhere else where they’re appreciated.