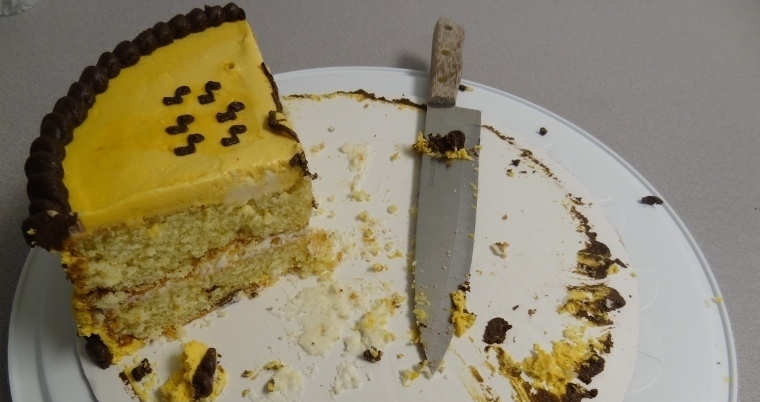 All we’re hearing about recently is food containing things it shouldn’t. Well, here’s another one. A Walmart cake containing a knife.

We’re hearing/reading a lotta stuff recently about our food containing things which they just shouldn’t contain. And I don’t mean the annoyingly boring shit about the horsemeat. Anyone who buys meat for 13p in their local Spar should expect it to be grim stuff and for it to not really contain what’s advertised on the packaging. If you buy ham that’s thinner than Nicole Ritchie’s neck and smells like dog food when you open it then it’s obvious that it isn’t ham at all and is more than likely churned up carrier bags that have been used to pick up dog shit from pavements and then they’ve been moulded together and spat out into transparent pieces and transported across Europe in the back of a lorry alongside a bunch of illegals. You should expect that stuff to not really be ham, it’s like going to the market and buying a pair of Aribas trainers. You force yourself into thinking it’s legit but it’s not and everyone’s laughing at you.

What’s even funnier is that people are moaning and griping about their beloved Birdseye burgers containing the meat of horse. Wake up. You’ll go and slam a kebab down your neck on Saturday night without a second thought. That kebab will be made up of stuff 10x worse than horsemeat, assured. Candlewax, vaseline, pubes, urinal cakes, rats, dentures; you name it, the shit will be in there. You shouldn’t be surprised when you’re having a shit on Sunday and you feel like your whole abdomen is being ripped out by every single plop that’s laying waste to the pan. No-one really knows what it is they’re actually eating, unless it’s a McDonald’s because McD’s is undoubtedly the cleanest and most nutritional stuff you can chow down on. Fact. Why else do you think the stuff doesn’t age?

â˜› McDonald’s Is Awesome: McDonald’s Cheeseburger Stays Exactly The Same For A Year

Throwing the horsemeat and other crap aside, there’s been a lot of stuff being reported about people finding actual items in their food. We all heard/read about the guy who found a whole dead bird in his Tesco salad and the guy who found a chicken brain in his KFC meal (why was he surprised?). It seems to be the cool thing to do at the moment; massive chains chucking random objects into their food. I suppose it’s a bit like smoking when you were at school. You tried it to fit in, became addicted but in the end it just fucks you up and is a bane on your life. All these graduate scheme store managers are only about 12, though, so who can blame them? If you don’t attempt to fit in, you’re chewed up and forgotten about.

â˜› They’re All Trying To Fit In: Ikea Recalls Daim Cake After Finding Human Poo In It

This one is pretty bad, though. Imagine you’re a 2 year old kid and you’re really excited because it’s your birthday and you’ve been given an awesome cake that you just can’t wait to grab a slice of and hand out to your friends. It’s an Elmo cake, too, and Elmo is your favourite TV character and you dream about him in your little kid dreams all the time. Well, imagine you’ve blown the candles out on it and everyone is really excited and your dad starts to cut the cake and hand pieces out when suddenly he stops because he’s found a paring knife embedded in the cake. Party mood: -6. We don’t need to imagine this because it actually happened and here’s the proof: 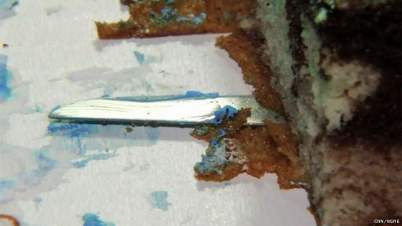 This happened to 2 year old Cayden Bibeau (pronounced Bebo) after his parents bought the cake from the huge chain (shock! horror!) Walmart. The party was cancelled, everyone left early because they weren’t happy with the Chocolate Fingers the family resorted to handing out and Cayden’s birthday bash was ruined and his parents’ effort and money were wasted. But at least they’re the owners of a new knife. You can never have too many knives. They can use it to cut the cake on Cayden’s third birthday, eh?

Here’s a video of Cayden’s old man explaining how it all went down. Excuse the guy who’s doing the voice-over. He sounds like one of those annoying guys who think they know everything but the only thing they know is their mother’s name:

â˜› Walmart Weirdos: People Of Walmart – What Do You Wear Shopping?