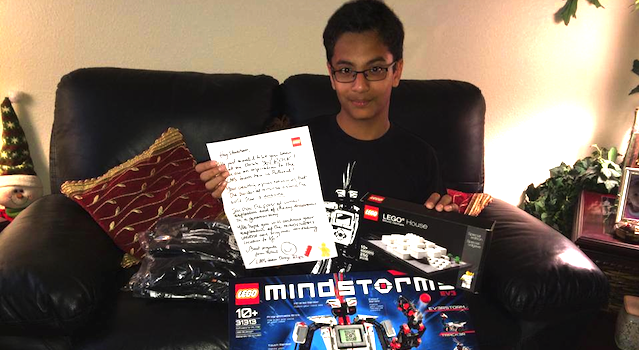 LEGO can be the key to success and happiness.

This 13 year old kid called Shubham Bannerjee looks like any other geeky 13 year old, but he’s slightly different to the rest in that he’s looking to make a shit ton of money in the coming weeks thanks to his original invention that he built with LEGO. It’s not quite as cool as a LEGO episode of The Wire, but it’s probably  a whole lot more useful.

It was all thanks to his school science fair. After seeing a flyer in his local area for a fund-raising event in aid of the blind, his mind whirled into overdrive and he started looking into the technology used to print Braille. Shubham was shocked to discover that the machines currently used to make Braille cost around £1278 and so set about trying to build a rival with his LEGO robotics kit. When he was finished, he had an alternative that had only cost him £319 to make and was arguably better. Result.

Shubham has called the invention ‘Braigo’ and it’s already caught the attention of Intel, who have decided to invest hundreds of thousands of dollars into his company, imaginatively entitled ‘Braigo labs’. Despite this Shubham is still staying true to his principles though (at least for now) stating that he intends to make more braille printers available for the blind people all over the world and that he wants to combat the companies that are taking advantage of blind people.

What a hero. Let’s hope he stays true to those principles. He’s estimating that the printers should be available next year some time. You can check out a video from Intel’s official announcement below.