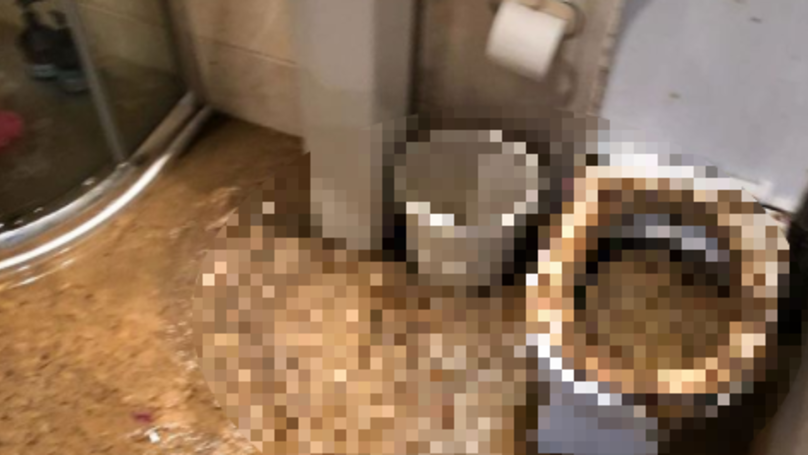 I imagine when you’re a plumber most calls are fairly routine and you might get a bit wet or whatever, but in general you’re just going to sort it out with the minimum amount of fuss and make a bit of money whilst you go about it too.

Not so on this call for 47 year old Steven Wolf who works for Kent-based Argyle Drains, who was called out to deal with what can only be described as a ‘volcano of poo’ last week. He had hoped it would be a routine call for a woman in a basement flat, but was instead confronted with the monstrosity that you can see below when he showed up:

Jesus. How does something like that even happen? How much do you have to eat to have that much poop backlogged in your toilet?

Steven tried to explain the situation by saying the following:

I was a cleaner 30 years ago, so the smell doesn’t faze me, but when I got home my wife wasn’t happy.

It smelt so awful she made me sit naked in the porch, she wouldn’t let me in the house.

One of my guys was gagging and retching when we first showed up to the job.

The volcano of poo was caused by the draining from flats above bypassing a blockage and pouring out of this woman’s toilet instead. It was disgusting.

It took three hours of rubber gloves and hard work to get the bathroom back to its usual standard. The poo was under the carpet and absolutely everywhere.

It was the worst job I’ve ever had, but I was very satisfied at the state I left the flat in.

I couldn’t believe how well I’d done. Everything was salvageable apart from underneath the floor.

Yeah fair play to the guy. I don’t think anyone would ever want to have to deal with that so well done to him for sorting it out, especially as I’m not really sure if it was in his job description to actually clean the whole place too. Legend.

For more of the same, check out this turd that simply refused to be flushed down the toilet. Rank.