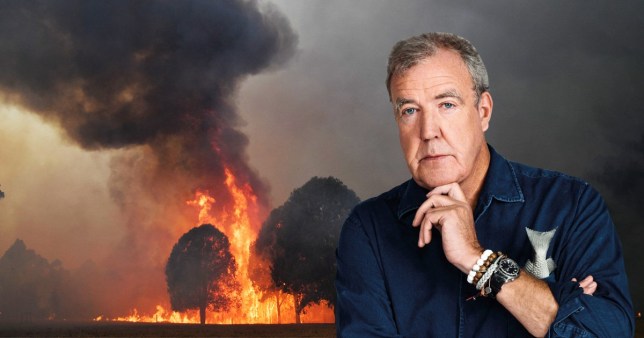 It’s only been a few weeks since the last time Jeremy Clarkson put his foot in his mouth, but he’s come under fire again this week for his comments about the Australian fires that have killed 23 people so far.

In his column for The Sun, Clarkson starts by joking that God doesn’t want people to live in Australia and that it was his ‘under-the-stairs cupboard for stuff he wanted to forget about’ – so ‘he set fire to it’.

He then goes into detail about some of the animals he says God created Australia to live on:

He even used this remote outpost to house some of his more ridiculous ideas. Stuff he came up with when he was drunk. Like those birds that can’t fly and that otter with a beak.

Then you have the kangaroo, which gets about by bouncing, and the koala, which is permanently stoned and catches chlamydia if anyone ever picks it up.

What really wound people up the wrong way though was this bit:

Plainly, God is embarrassed. Because he’s decided to set fire to it. It’s been argued the fires raging across the country were caused by global warming or out-of-control barbies.

But when you look at the footage, you know something biblical is going on. Those things are huge.

Here’s some of the response to his article:

Why is anyone requesting Jeremy Clarkson write a Column about the Australian bush fires? He can’t, and doesn’t, offer any substance or wisdom regarding the situation. A disgusting & monumental failure to be funny at the complete wrong time. Do you really have no compassion? Moron

@JeremyClarkson I will never read or watch anything of yours again. You are despicable and should be ashamed. People are losing their towns, home and lives in these fires and you make fun of it? Shame on you

I can’t believe the poor taste and lack of empathy from @JeremyClarkson in regards to the Australian bush fires. I’ve been a fan of his for donkeys years but this is below him and ruins @thegrandtour for me #AustraliaBurning #PrayForAustralia

Can just imagine the Sun editors cracking up while hitting ‘Publish’ and anticipating the backlash, but I really wonder if Jeremy Clarkson had a clue how bad situation in Australia really is? 480 million creatures dead, including 8000 koalas and many species being pushed to extinction, plus the aforementioned 23 people. At time of writing more than 100 fires were still raging in New South Wales, Victoria, and South Australia with temperatures soaring past 48c (120F).

The guy was probably just trying to be funny and after all he is pretty well known for his weird sense of humour so it isn’t even that shocking he wrote that TBH. Still probably a bit “too soon” to be cracking jokes considering the death toll is still rising.