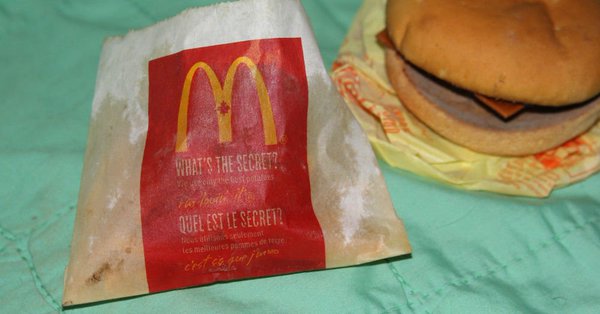 Why would anyone want that?

It’s long been said that most fast food simply doesn’t decay and go off like normal food, and there are enough examples of this all over social media to prove that it is in fact 100% true – but they still keep coming.

The latest one comes courtesy of a guy from London, Ontario in Canada named Dave Alexander who decided to put his six year old McDonald’s fries and cheeseburger for sale on eBay. He started the bidding at $29.99 and was pretty stoked when someone actually bid up to $82 for it.

Unfortunately, eBay took the listing down before Alexander could actually sell it citing the fact that he was selling food without an expiration date which was against their official company policy. Alexander has disputed this though, saying the following (along with the original listing):

This is no joke. This is a legitimate, very real McDonald’s Cheeseburger & Fries that we bought in London, Ontario Canada on June 7, 2012. ORIGINAL OWNER – Never eaten.

The fries are stunningly good looking. The fries look like they were purchased this morning.

The burger itself has darkened a little bit. The bun is about as hard as a hockey puck, but it looks just like it’s brand new cosmetically.

It basically has petrified itself. It looks very sellable. I’m going to assume that someone’s going to rehome my cheeseburger.

We live in the country and we’ve never seen a fly land on it. Ever.

To everyone inquiring about the 6 year old Cheeseburger. We are astounded that ebay has taken down the listing.

We were told that it didn’t have an expiry date on the food item. I’m encouraging EVERYONE to contact ebay about this. The ref number is #1-66527649797 rep was FAYE.

It was NOT being sold as edible food and restaurant food doesn’t come with an expiry date as far as we are aware.

So, they are requiring something that is impossible to provide and doesn’t exist. This must be corporate pressure.

So it looks like McDonald’s leaned on eBay to get them to take the listing down? I suppose I can kind of understand that as they wouldn’t want rumours to be spread about how crappy their food is anymore than they already are. Having said that, there’s enough evidence of how it doesn’t seem to go mouldy and decompose all over the internet – including this site – so I’m surprised they haven’t tried to do this more. I guess they’ve probably got some big connections up there at eBay though right, so it probably only took one call from one big cheese to another big cheese eh?

For more evidence of McDonald’s being trash, check out what 2 year old food from both McDonald’s and Taco Bell looks like. Take a guess beforehand too.