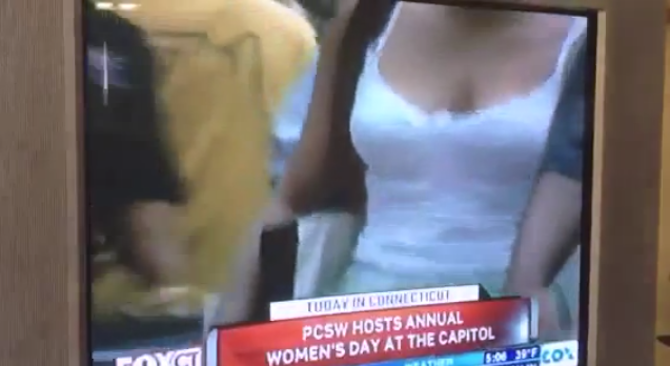 There’s something seriously wrong with this video of a Fox News anchor women reporting about International Women’s Day.

We absolutely love it when shit goes wrong during live TV broadcasts, it really does brighten up our dark and depressing days, and we especially love it when shit goes wrong during news reports, because they’re the funniest kind of blunders out there. You know, news reports and news reporters are always so serious and down right depressing, it’s a bit of a lifter when someone screws up and the resulting mistake is broadcasted to millions of people in one instant hit. And then with the power of the interwebz that screw up is broadcasted to tens of million more people until it finally ends up on Sick Chirpse and you’re sitting there in your boxershorts eating your soggy bowl of cornflakes at 2PM on a Friday LOL’ing your cock off – it’s a beautiful thing.

What goes down in this news report is an epic cock up of grand proportions. If only half of this cock up had of gone down then it still would have been completely jokes, but the fact that the two parts of the blunder come together in perfect harmony just makes you think that this MUST have been set up by some absolute joker of an employee who was working their last shift and looking to get some mega kudos from their buddies.

The scene is that a Fox News reporter is talking about International Women’s Day which went down last week (we wrote about the top 5 most messed up women serial killers to celebrate) and whoever was working in the live editing suite that day had one job and one job only, and that was to cut to a reel showcasing some awesome women doing awesome things and giving off totally good vibes about women all over the globe, because that’s kinda the whole point of International Women’s Day right?

â˜› Have You Seen This? News Reporter Gets Punched In The Face Live On Camera

Well whoever was working in the editing suite that day screwed up, and boy their screw up was totally off the radar. Basically, they cut to the wrong clip and showed footage that some creepy cameraman had taken that followed a bunch of women’s boobs while they walked down the street, probably with no idea that they were being filmed.

So the first question is, why the hell was the cameraman filming a bunch of women’s boobs in the first place? I presume they were waiting to start shooting some serious shit and got bored so decided to follow a bunch of girls’ boobs around while passing the time, not noticing that the camera was actually filming and that the film was being recorded back at HQ.

So yeah, that was pretty jokes and if the footage had have ended up on any other type of report it still would have been funny, but the fact that it some how ends up on a report about International Women’s Day makes this one of the funniest TV blunders we’ve ever seen. Kudos to all who were involved, there is no way this was an accident.

â˜› Check This Out Next: Swedish News Accidentally Broadcasts 10 Minutes Of Hardcore Smut