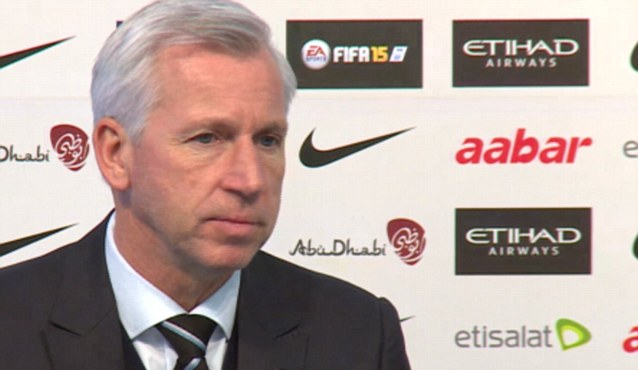 Alan Pardew took his Newcastle side to the Etihad yesterday in the Capital One cup and surprisingly managed to emerge with a 2-0 victory against a fairly decent Manchester City side. It was the perfect result for a manager who’s been under pressure most of the season so far.

However he found himself under a different kind of pressure in his post match press conference though as when he was talking about Ryan Taylor he was interrupted by a completely weird and bizarre announcement about Ebola over the loudspeaker in the stadium. Forget the fact that an Ebola announcement is strange anyway, but when you hear this it’s even more stupid because it literally makes no sense whatsoever and is all cut and muffled and going in and out of sentences. It’s really, really freaky.

Pardew didn’t know what to make of it either and sat there with a bemused look on his face like a complete gimp waiting for it to end so he could finally finish speaking about Ryan Taylor. I’m sure everyone present and watching was dying to know too.